Biggest geek news of the week so far is definitely the tragedy afflicting the Zack Snyder family and Joss Whedon taking over as director of Justice League. The fact that I really hated Snyder's take on superheroes in general and Superman in particular has no bearing on the terrible sadness he is fighting, after the suicide of his daughter. He said he knew he had to come clean about the reasons for this move, because otherwise the internet would explode with speculations about why Whedon (who has a very different style) is replacing him at the helm of the film. He is probably quite right.

• Congratulations to the winners of the Nebula Award! Including one of my personal favorites, Seanan McGuire. Hugos are still pending...

• A transgender artist drawing a comic about transitioning? Of course she's being harassed, doxxed and threatened with various forms of violence! Internet, you suck. Sophie Labelle had to cancel her book launch as well, which has a serious financial impact. Is that the real purpose: kill through financial strangulation? That would be speculation.

• The fascinating story of the battle between children's author E.B. White and the early proponents of children's libraries, via the New Yorker. More interesting to me than the battle of Stuart Little was the picture of libraries at the turn of the century, places barred to children kept at arm's length from literature.

• Go ahead, Browncoats. You can cry now.

• My friend Dennis Upkins has the only quasi-positive review of the new King Arthur film I've read. He makes some good points, as well as providing some shirtless Charlie Hunnam, which is always a positive point. (Readers mass-click on the link.) 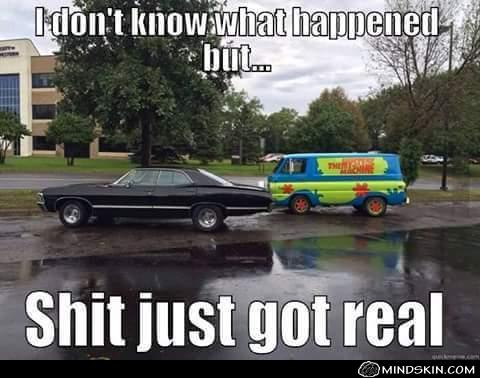 • As Supernatural is the current holder of the ER Memorial "That's Still On?" Award, it only seems appropriate that the Winchester Boys will be crossing over with Scooby-Doo, in full Hanna-Barbara cartoon-land. I stopped watching the show several seasons ago when it seemed that all the plots were "rinse, repeat." But I swear I might jump back in just for that.

• Did The Dark Crystal freak you out as a kid? Great! Now you can freak out your kids, too. Netflix has ordered 10 episodes for a weird-out miniseries. Minus Jim Henson, alas.