RIP: Robert Guillaume, a voice from another era

I sometimes wonder how the obit writers choose what to put in the headline when an actor or other artist dies.

Sure, you could say that Robert Guillaume was the star of Benson or Soap, and those things are true. Most of his obituaries led with that, though he's said he was initially hesitant to take the role of a black servant to a white family.

Or they led with with his turn as the voice of Rafiki in The Lion King, which won him a rare Grammy for spoken-word performance.

But he was more than those things that lead his obituaries.

He was Nathan Detroit in an all-black revival of Guys and Dolls, which earned him a Tony nomination.

He was Isaac Jaffe, the hard-edged executive producer on Sports Night.

He used that magnificent voice to play the Phantom in Phantom of the Opera (replacing original Michael Crawford, and assholes boycotted because he was black), and in the lead role in Cyrano.

His voice belonged to a different era, one that we may never see again.

And yet when I think of him, I think of the harried school superintendent in Lean on Me. Morgan 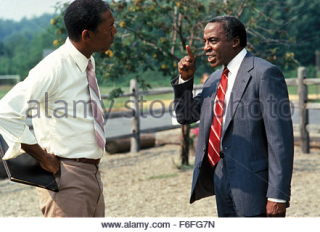 Freeman gets a lot of attention for his performance as the arguably genius, arguably bastard Joe Clark, but Guillaume centers the movie as the man behind the curtain, one of only two who have the spine to stand up to Clark’s flailing. Click that link, because you’re seeing two brilliant skilled actors maneuver a difficult scene with a dozen different emotions.

He was from here. Born Robert Peter Williams in St. Louis, survived child abuse to be raised by his grandmother, worked menial jobs in the early 1950s while attending college at night at St. Louis University and Washington University. Unlike many in his era, changed a demonstrably ordinary name to something far more unusual. Guillaume came from the French translation of William.

He lost a son to AIDS.

He dreamed of being the first black tenor to sing at the Metropolitan Opera, but never did.

He died of prostate cancer yesterday.