You can see 'Justice League' with a clear conscience

Like many of you, I was leery of Justice League. After the dull, morose betrayal of Superman in Man of Steel and its nonsensical and annoying continuance in Batman v. Superman, I was not at all eager to watch Zack Synder take a third shot at my favorite superhero, even if he was dead.

This was compounded by terrible reviews, the horrifying picture of Amazons in leather bikinis, reports of annoying upskirt shots of Wonder Woman and the development hell involving changing directors in midstream (albeit to one whose work I generally enjoy much more.)

I am happy to report that Justice League is much better than its reviews, and most of those reports appear to be unfounded. While far from flawless, you can see it with a clear conscience and the exploitation is, at least, evenhanded.

First, let's deal with the sexism angle. I read about upskirt shots and was actually watching for it, and yet saw almost nothing like that - in fact, both my husband and I wondered if we were watching the same film about which we had read so much. There is one annoying shot of Diana in leather pants from the rear, and the costume designer put her in a stupidly low-cut shirt for her meeting with Cyborg that made me wonder if she was planning to go clubbing later.

But her fighting style, displayed in Batman v. Superman and honed in Wonder Woman, was thankfully in its best form here. She is clearly the best and most useful fighter of the group, truly the heart of the team, and she is shot (and for the most part treated) as the equal of any of the men. Far from disappearing into background eye candy, she's the equal of Batman and treated as such by the others - perhaps with more respect than Bats.

As for the leather bikinis, they're there. And they're annoying. But they're also background. Why they chose to advertise those idiot outfits in publicity shots I can't imagine, because the warrior Amazons do their fighting powerfully and in their battle armor - the same costumes they wore in Wonder Woman. Hippolyta is fully dressed, folks. This was the argument I had when the complaints arose about the Leather Goddesses of Phobos - I mean Themiscyra: While male heroes are also objectified, they get to wear clothes (and usually armor) when fighting, and so should the Amazons. Fortunately, they do.

And speaking of objectification... we have multiple shirtless shots of Aquaman, Batman, and Superman. If anything, I think the balance of objectification tilted heavily to the male (though they had the numerical advantage in that there's only one woman on the team). That's not to say objectification is good, but let's not pretend that superheroes have ever been realistic depictions of the human form. There is a beauty to the human body, and God knows there's plenty of that in these films. The key is whether the character is being forced to do unnatural things or wear unnatural/uncharacteristic/impractical clothing solely to attract a sexual gaze, and that is generally not the case.

(Except Diana really shouldn't wear heels. But we will never convince Hollywood that a back spin kick is really hard in heels.) 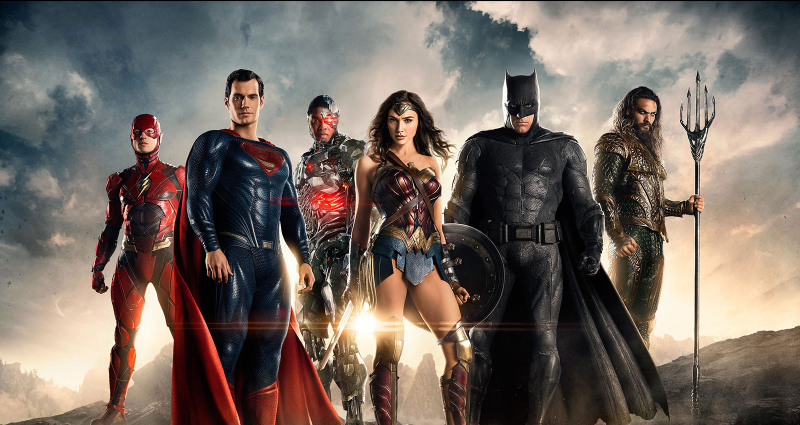 Here's the problem: the villain was dull as dishwater, and the overall plot was standard comic-book-dumb. Stop me if you've heard this one before: an otherworldly super-strong (usually horned) villain wants to destroy the world with a magic MacGuffin! Or at least take it over and remake it in a bad way. He has a bunch of nameless scary-looking henchcritters who have no mind or personality (so it's okay to kill them) and he has absolutely no personality whatsoever, speaking in dull cliches. Pick your comic book movie, and I've probably described it. Whatshisname from Justice League brings absolutely nothing of interest to the movie, and his scenes were the big drag.

Fortunately, the Justice Leaguers more than made up for him. Their interaction was fun, origin stories were dispensed with in a handy yet satisfying fashion, and you can see Joss Whedon's hand in the dialogue. This may be a minus for some who don't appreciate Whedon, but I find the snark a vast improvement over the dull, meandering and occasionally infuriating Man of Steel and Batman vs. Superman.

Someone asked me if I would have enjoyed it as much if three delightfully fit gentlemen had not wandered through the story occasionally half-clad. Honestly, I really would. A hot guy is still boring without a personality, no matter what he looks like without a shirt. I'm a fan of dialogue, and I appreciate snark and personality in characterization. Each character was well-played - I've enjoyed Affleck as the Bat, especially since he's not playing a brand-new Batman, but one with a few scars and losses merely hinted over the years. Gal Gadot as Wonder Woman hardly needs lauding beyond the applause she's already received.

But the rest of the cast also stepped up. Jason Momoa created a new vision of Aquaman that I really enjoyed, with or without shirt (though I hear his best scene was when I had stepped out for the restroom, dammit). I wasn't a fan of Ray Fisher's mopey Cyborg at first, but he grew on me as he grew out of his initial characterization. And Ezra Miller as the Flash fulfilled comic relief with a twist of serious pain very well; he could easily have been a one-note laugh track as he's the excited young kid (read: Spider-Man) in a group of battle-worn grownups, but his backstory gave us a real history he handled well in his scenes with his father.

(Note: there are multiple moments or lines from the trailers that are not present in the film. That's what we get for $25 million worth of reshoots.)

Sadly, the supporting cast has little to do: Hippolyta has her big sequence and disappears, and Lois Lane and Martha Kent are there mostly to look sad after the events of Batman vs. Superman. I debated whether to include my gripes about the Big Plot Twist that is basically the worst-kept secret of the year: of course Superman comes back, and there's some issues surrounding that, but DUH we all read the comics.

And that's one of my biggest gripes with the previous movie: they pulled the pin on Doomsday way too soon, before we really had much time to get attached to Superman (or much reason to, the way Snyder was writing and directing him). The Death of Superman had real impact at the time, but now, every hero who "dies" comes back again, and we knew right up to the end of BvS that he would be back. This movie seems to imply that the world sucks and all hope has gone out of the world because Superman was dead, and it would return with his return - playing further in the Messianic allegory drawn from the comics and the original Gore Vidal script in 1978.

But Snyder's treatment of Superman in the past two movies never really let us buy into him as a beacon of hope, so it's hard to see his return as the catharsis the movie wants it to be. Unfortunately, it also underlines that Lois continues to be solely a vessel for Superman, reduced only to her grief and defined entirely by him. Amy Adams is a fine actress and deserves better, as does Diane Lane, who is continually underused as Martha Kent.

Fortunately, Henry Cavill finally got the chance to play the real Superman, not the morose shadow he's been forced to play for two movies now. A friend of mine wrote that Christopher Reeve's Superman was the Clark Kent who was raised by New Deal Democrats, and Cavill's Superman was the Clark Kent raised by Ayn Rand red-state Republicans. I leave the politics for others to debate, but given Snyder's publicly-avowed fondness for Randian philosophy and his previous superhero work, I think there's definite truth to this analysis.

Here, however, Superman is the Superman I knew from the Reeve films, and my father knew from the TV series. There's no conflict about whether to hide or be a hero, no muddled questioning whether to let people die when he could save them - I mean, seriously? There's more than a hint of Reeve in Cavill's performance here, but also his own gravitas. Congrats, Henry, we always knew you could do it. (And no, you can't tell that they had to CGI his mustache out because the other movie he was filming wouldn't agree to let him shave it and really, fans can argue about anything.)

One of my biggest complaints about superhero films is the pervasiveness of artificial conflict. I find it lazy writing for a superhero film to set the heroes against each other for no reason other than "it would be cool." Conflict is necessary in all stories, but it should come organically, from real issues and problems, not just to set up a nifty fight scene.

I was annoyed for much of Avengers because so much of it was constructed to put the heroes at odds with each other for no actual reason. There was zip-all reason for Thor and Captain America to fight except that fanboys would think it was cool to see the hammer hit the shield. That's it. So they tortured the plotline into a pretzel to make that happen. Again and again we have heroes thrown together and fight, only to make up for no reason, just so that we can see a cool fight.

This was worst in Batman vs. Superman, of course, where the entire premise depended on a conflict between these two heroes and no one, including the writers, could come up with a plausible reason why this would happen - or why they would make up at the end. (That was just stupid.)

This is where Justice League really made me happy. There's some interpersonal friction because superheroes = extreme personalities, and because Bruce sucks with people. Fortunately, Bruce knows that he sucks at peopling, and more importantly, the script knows this, and it shows. But the heroes realize that the real threat is our Boring-Ass Villain, and they work together. You know, like heroes. At the end, it seems clear they're hoping for more stories, and I'd definitely sign up for those.

In short (too late), if you like superhero movies, or comics, or Superman, or Batman, or fun dialogue, or popcorn, you can see Justice League with a clear conscience and without worrying about annoying, problematic gender roles. Really.