I could keep listing the latest people revealed to be sexist, harassing assholes in the arts - or at least accused of such - or I could just keep repeating, “Tom Hanks is still a nice guy.”

So, apparently, is Robert Redford, as he spoke at Sundance Film Festival this week and said “the role for men right now is to listen.” Sundance is hitting the controversies hard this year, including Monsters and Men, a racially charged police killing drama; Tyrel, about a man who panics when he realizes he’s the only person of color on a weekend trip; the dystopian science-fiction comedy Sorry to Bother You; a reimagining of Hamlet from Ophelia’s perspective starring Daisy Ridley; and a documentary titled Half the Picture about the systemic discrimination of female filmmakers. Plus Our New President, which is about.. exactly what you think.

• Oh boy! I can’t come up with a better headline than the one AV Club did for this piece: “Some absolute maniac made an interactive map tracing all the jumps from Quantum Leap.” Now I want to go watch me some Scott Bakula good deeds.

• The richest man on earth is raising the rates for Amazon Prime, but it only affects those who pay month to month. If you pay for Prime on a monthly basis, it’s going up from $10.99 to $12.99, or $156 a year. Ouch. That’s an 18-percent increase for folks who pay monthly, which is largely lower-income consumers. Annual memberships are still $99 a year (which used to be $79 a year, and don’t think we’ve forgotten, Mr. Bezos.) Meanwhile, low-budget content such as One Mississippi is out, as is indie film development, in favor of big splashy blockbusters.

• For those of you who still can’t get over it, Rian Johnson tells us exactly how Leia did what she did in The Last Jedi. I’m not getting into this again, because I can explain it perfectly fine myself a hundred times and the screaming is going to continue. Sigh. By the way, one asshole created a self-described “chauvinist cut” that edits out all the women in the movie. Is it me, or is this crap getting worse?

• But… but… Chris Hemsworth’s contract with Thor is done, and said that as far as he’s concerned, he won’t be playing the god of thunder again. io9 seems to think he’s putting out feelers about coming back, but we should wait and see how Avengers does…

• We try to stay out of the real world here in CultureGeek Land, but The Final Year is starting to make noise as a documentary about the last year of the Obama administration. It seems they let a documentarian follow them around through the trials of 2016 and the work of Secretary of State John Kerry, U.N. Ambassador Samantha Power and Deputy National Security Advisor Ben Rhodes around the world as they advised Obama - including their reactions to Trump’s win in November.

• Happy *gulp* 25th anniversary to Star Trek: Deep Space Nine, arguably the best-acted, most well-written of the Trek series (and my favorite by a nose). If I could just get my mind around the idea that it’s been a quarter century since the premiere…

• Speaking of Trek, Discovery has been nominated for outstanding drama series in the 19th annual GLAAD Media Awards. It faces Billions, Doubt, The Handmaid’s Tale, Nashville, Sense8, Shadowhunters, Star, This is Us and Wynonna Earp. 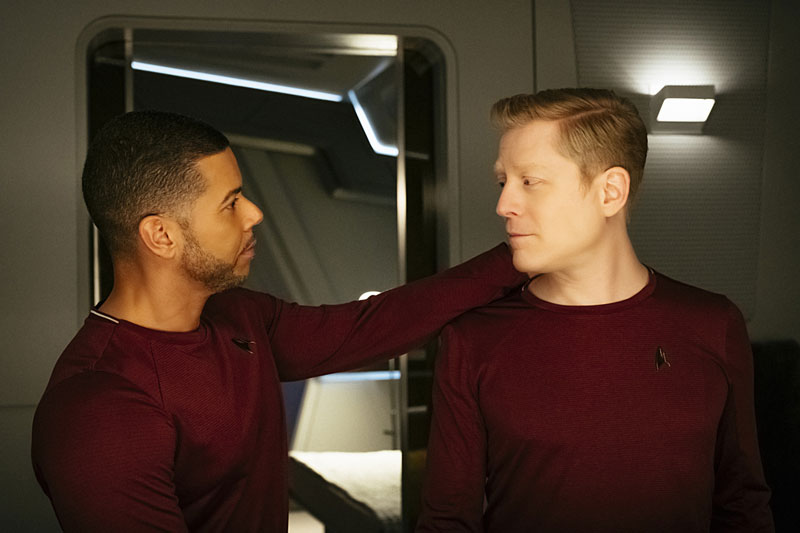 • Looks like Black Widow is finally getting her own movie, though the nature of that movie is still pending. Naturally speculation has already begun. As for me, I side with Keith DeCandido in his rooftop yell of “It’s about fucking time you goddamn imbeciles!”

• Keira Knightley talks up her new movie Colette, while tackling #MeToo head-on. “What’s been really interesting is that it’s not just this industry - it’s in every industry… What was fascinating about the #MeToo movement was I was sitting with friends who weren’t in the industry, and there wasn’t one of us who hadn’t been assaulted at some point. We’d never had that conversation before.”

• Highlights (or lowlights) of the SAG Awards include Gary Oldman (Darkest Hour) beating out Daniel Kaluuya of Get Out for best lead actor. I…. might have issues with that choice. At least they didn’t classify it as a comedy?

Frances McDormand took leading actress for Three Billboards Outside of Ebbing, Missouri, while I would have bet my money on Sally Hawkins for The Shape of Water, based on buzz alone. Three Billboards also picked up supporting actor for Sam Rockwell, even though Woody Harrelson was nominated for the same movie and that often splits the vote. Allison Janney received supporting actress for I, Tonya, surprising many who had bet on Laurie Metcalf for Lady Bird.

Three Billboards also got best cast, which lends credence to the Oscar Buzz. Wonder Woman won best action performance by a stunt ensemble, which is a weirdly specific award.

In TV Land, the lead acting awards went to Alexander Skarsgard and Nicole Kidman of Big Little Lies. The interesting part of this isn’t the winners, but the lineup of nominees. For men: Benedict Cumberbatch, Jeff Daniels, Robert De Niro and Geoffrey Rush; for women: Jessica Lange, Susan Sarandon, Reese Witherspoon and Laura Dern. These are for TV movies, folks. All the star power is going to the small screen.

For ongoing dramas, Sterling K. Brown wins for This is Us (no surprise) and Claire Foy for The Crown - a bit of a surprise, given the buzz around Millie Bobby Brown of Stranger Things and Elisabeth Moss for The Handmaid’s Tale. In comedies: William H. Macy for Shameless, Julia Louis-Dreyfus for Veep. This is us won best ensemble - again, no shock; Veep best comedy and Game of Thrones defeated Homeland, The Walking Dead and Stranger Things for action ensemble.

• I cannot endorse this column in Book Riot, because you should never stop buying books! However, I can certainly relate to “hoard[ing] books like Smaug hoards gold.” My husband agrees with the sentiment as it applies to me, but disagrees with my pronunciation of “Smaug.”

• Sue Grafton, author of the Kinsey Millhorn mystery series, died tragically one letter short of her alphabet-based series. Beginning in 1982 with “A is for Alibi,” Grafton was part of an insurgence of female-centered detective novels, which was to end next year with Z is for Zero. However, cancer took her just before New Year at age 77. Her daughter wrote, “As far as we in the family are concerned, the alphabet now ends at Y.”

• Dolores O’Riordan, lead signer of the Cranberries, died suddenly Jan. 15 at age 46. No word yet on her cause of death, but she had struggled with illness and chronic pain. O’Riordan was the band’s chief lyricist and co-songwriter as well as lead singer.

• Jerry Van Dyke, four-time Emmy-winning actor of Coach and many other shows, died Jan. 5 at age 88. His health had deteriorated since a 2015 traffic accident. Younger brother of Dick Van Dyke, Jerry was best known for Coach, but also performed on stage and in guest appearances on many sitcoms.

• Star Wars actor Alfie Curtis, best known for playing Dr. Evazan in the first film, died in December at age 87. Curtis also starred in The Elephant Man and other films, but you’ll remember him as the disfigured guy in the Mos Eisley bar who tells Luke he has a death sentence in 12 systems. Of course, he has a whole backstory in the novels.

• Rapper Fredo Santana, too goddamn young at 27. Born Derrick Coleman, apparently he was hospitalized for liver and kidney problems and died of a seizure.

• Red Sparrow has an interesting cast, starring Jennifer Lawrence and Jeremy Irons. I liked this movie when it was called Point of No Return/La Femme Nikita, so I’d give it another shot. (Seriously, it is almost literally the same plot, but I give them credit for not immediately opting as a “reboot.” Probably because it’s based on a book…)

• Speaking of reboots, we are restarting Tomb Raider next. It looks fairly paint-by-numbers, but you should never underestimate the willingness of gamers to watch a woman in a tank top in the jungle. I’ll give her this: Alicia Vikander has actual musculature and appears to be doing plenty of fisticuffs. I’m always in favor of more women action heroes.• There’s plenty of speculation about Dundee, a trailer that dropped out of nowhere ostensibly surrounding the New York-raised American son of Crocodile Dundee in search of his dad in the outback. The teaser is goofy-stupid, leading many to believe it’s a hoax. But it came from Rimfire Films, which produced the first two Dundee films. There are thoughts that they’re warming up to a Super Bowl thing, which can only be an improvement over this teaser.

• I’m intrigued by the sneak peek at Marvel’s Cloak and Dagger. Never read the comics, but the leads have charm, and so far Marvel has done all right with TV shows not based on Iron Walking Privilege. Check it out.

• She isn’t singing with an adorable crab this time: Siren reforms the traditional mermaid into something a little more dangerous. I wouldn’t mind making it a film, but a TV series? There isn’t much to the trailer, but check it out anyway.