The closest most women got to the Grammys Sunday night was when Hillary Clinton read from Fire and Fury during a comic skit. Click here to see what has the political side foaming at the mouth.

The Grammys are my annual reminder that I’m too old to be cool. I look at the list of people who are nominated, and I’m lucky to recognize one out of ten. Fortunately I have a coolness-to-old-person translator in my house: CultureGeek Jr., who looked at the list and said, “Eh. I’ll watch when they nominate Twenty-One Pilots again.”

I might add that every song nominated has a gazillion songwriters - one has eight. EIGHT. I can’t get eight writers in a room to agree on what to order for lunch.

But I wasn’t the only one who noticed that only one woman won a major Grammy this year, as Bruno Mars swept best song, album and artist. #GrammysSoMale began to trend, and Recording Academy President told Variety that, basically, “women need to step up.”

No, really. “I think they would be welcome,” he says. Oh, I’m sure they’re just not applying for the jobs, that must be it. Hopefully we’ll see Taylor Swift next year - no, that’s not me being snarky, that’s an actual quote. If you really care about the snubs and surprises, here’s some analysis, and a list of winners, plus the “best and worst” according to Variety (and really, U2’s prerecorded piece was the only rock performance? What?)

Well, I guess that explains why Ed Sheeran’s annoying “Shape of You” beat out four women singing about surviving sexual abuse, religious faith, depression, women’s empowerment… Even lame old me has heard “Shape of You,” and it’s all about some guy lusting after a woman’s hot bod. Wow, Grammys, way to pick something “edgy.” Meanwhile, best-album nominee Lorde was not given a chance to perform, but the nominated men were. Nice.

In the meantime, the telecast had the smallest audience in the history of the Grammys. So maybe it’s not just me being old.

• It’s a beautiful day in the neighborhood! Tom Hanks is set to play Fred Rogers in a biopic titled You Are My Friend. A stamp and a movie in the same year - good year for the late children’s TV host. The film is inspired by the real-life friendship between Mr. Rogers and journalist Tom Junod, in which a cynical journalist (what??) finds his outlook on life transformed by the gentle-voiced host. Note that Hanks played Walt Disney last year, Ben Bradlee this year… now Mr. Rogers. Who should Hanks play next? (Don’t say Woody in Toy Story 4; that’s already underway.) 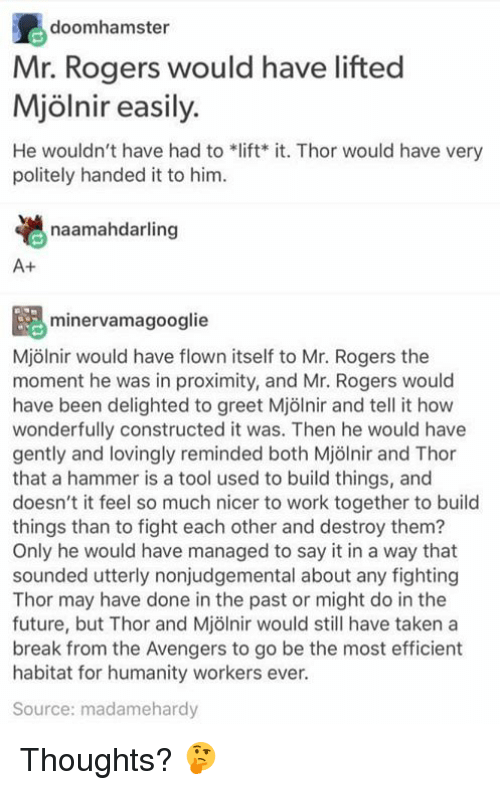 • I missed the film adaptation of Gerald’s Game, part circumstance and part hesitation to subject myself to a film version of a book very difficult to read. It’s a good book, smart and tense, and also extremely unsettling. I’m not sure how well film could adapt a story that takes place almost entirely in a character’s head while she’s alone in a room, too.

But the director who tackled that is now getting his hands on Doctor Sleep, a book about which I have serious mixed feelings. It’s interesting, but includes such a giant (and, in my mind, unnecessary) retcon to the original novel that it really distracts from what could have been a compelling story on its own. Another major issue: Stephen King, whom I usually adore, spent a good portion of the book working out his issues around addiction. Those are important issues, but they didn’t make for particularly compelling reading. We shall see if the movie can trim things up a bit.

• It’s no secret that the late lamented Prince recorded a gazillion songs he never released, because reasons. (Seriously, if you got something good, don’t you want people to hear it?) Of course his six heirs are squabbling over the estate, but apparently they can all agree on making money, so we’re going to get some new Prince music soon. That includes an expanded edition of Purple Rain including unreleased material.

• If you want historical realism, don’t go to the movies. I, Tonya apparently has only a skating acquaintance with the truth, according to an Oregonian journalist who actually covered the scandal.

• As previously stated, I’m not a huge fan of the current trend in resuscitating shows from the 80s to new quasi-life. See last week’s response to the revamp of Heathers. I’d rather the dunderheads in Hollywood comprehended that what made those shows awesome was good writing, not corporate-designed pablum, and authorize some NEW ideas. On the other hand, I truly believe that the 21st century needs Murphy Brown, with all the snark that 71-year-old Candice Bergen can level at us. (Not so sure about Magnum P.I., but I may give Cagney & Lacey a shot.)

Just to recap: others being revived this year include The Greatest American Hero, Charmed and Roseanne (and don’t get me started) to join ongoing reboots Will & Grace, Hawaii Five-O, One Day at a Time and Fuller House, which is inexplicably coming back. Not so much Dynasty.

• Casey Affleck, who is in the Dishonorable Mention Club for accusations of sexual harassment, will not present the best actress award at the Oscars even though he won best actor last year, and it’s tradition. It’s not clear whether he dropped out on his own or was asked to do so.

• What. WHAT. If it were anyone but Steven Spielberg, I would be sharpening the pitchforks and lighting the torches about a remake of West Side Story. But writer is Tony Kushner of Angels in America and Fences, and Spielberg is unparalleled. Some things should not be remade, because they were perfect the first time, but I'm trying to keep an open mind. (Okay, almost perfect. Natalie Wood is about as Latina as I am.) Seriously, would you want to be the actress who stepped into Rita Moreno’s shoes as Anita? Read this piece that interviews Moreno last year about “brownface” and how they darkened her skin even though she IS Puerto Rican.

Still, the casting call makes it clear they intend to cast Latinos in the Latino roles (shocker), but I’m a tad concerned at “must be able to sing, dance experience a plus.” Um. Steven, you do get how much "dance experience" is necessary to pull off West Side Story?

• Fire and Fury is the top book in the country for the third week in a row with 1.7 million copies sold. Four more books debuted this month critical of current politics and all are on the top-ten list. Meanwhile 12 Strong, a movie about U.S. Special Forces on horseback in Afghanistan, is now in theaters, adapted from the novel Horse Soldiers. Top fiction this week is The Woman in the Window by A J Finn.

• Speaking of books, a “glitch” in KDP Publishing (run by Amazon) indicated a possible future 50-percent royalty level. No one actually believes it’s a glitch, so if you do self-pub on KDP, best check this out.

• You need this: Check out the 30th anniversary celebration of Phantom of the Opera at the Empire State Building.

• Mort Walker, cartoonist of Beetle Bailey and Hi and Lois for more than 80 freaking years. He sold his first cartoon at age 12 and published more than 100 cartoons while still a teenager. Beetle Bailey was syndicated after his World War II service, personally approved by William Randolph Hearst.

• Black Panther dropped a new TV spot during the Grammys; no new plot points, but it’s not like it matters - we can’t wait.

• Saw the new Mamma Mia! Here We Go Again trailer, which did something none of the previous ones managed to do: made me vaguely interested in watching the first one.

• “Anybody want a peanut?” The late Andre the Giant (born Andre Rene Roussimoff) is the subject of a new documentary, covering his entire life from wrestling to The Princess Bride. Honestly, I’m not a fan of professional wrestling, but everything I’ve heard about Andre as a man and a person is quite impressive.