Bloodless business news squibs buried under a mountain of awful in this news cycle reported that B&N launched a round of layoffs that would save $40 million from the company. Exact numbers weren’t available, but its SEC filing reported the cuts as “a new labor model… that has resulted in the elimination of certain store positions.”

Yeah, if that corporate-speak didn’t strike fear in your heart, try reading Audrey II’s take on it, which seems much more comprehensive. (I tried to determine her real identity, but she’s pretty well locked down. Too bad, I wanted to give her credit for her analysis, which beats the hell out of Publisher’s Weekly’s recounting of the SEC filing.)

Basically, Barnes & Noble laid off every full-time employee. Every lead cashier, every receiving manager, every Nook problem-solver, every newsstand lead. That “new labor model” seems to be “cheap part-time minimum-wage labor for the death knell of the company.”

Worse, allegations abound that the full-timers were told their jobs were safe, that the positions would be eliminated through attrition. As leads left, they would not be replaced, but no one would be laid off. That ended Monday when they were fired anyway - lifetime employees. No notice. When, exactly, did companies decide that it’s better not to give workers a chance to start their job hunt while still employed and give them whatever notice they can so they can plan their major life decisions with all the facts?

Read more about how B&N cut staffing during the holidays, which drove annoyed customers online; and how ship from store meant stripping the shelves, which further annoyed the customers who did come in for a real-live bookstore experience. That probably affected sales somewhat.

Audrey II makes a strong argument that this is the behavior of corporate pirates looking to strip the company’s bones bare before the inevitable bankruptcy, not a company trying to rebuild and save the store. It’s hard to argue that she’s overreacting, when B&N paid $14.5 million in bonuses to two CEOs (not two categories; two guys, one of whom had been CEO less than a year) while cutting 1,800 employees for $40 million.

You won’t find astute analysis in the business pages this week. The closest you’ll come is a single line at the end of Fortune, speculating that B&N’s top investor is urging a sale of the company. Everyone else basically reprinted the SEC filing and no-comment from B&N corporate. Instead, I’d say read the anonymous Audrey for a better look at what the slow suicide of Barnes & Noble means for all of us in the book biz. Spoiler: It’s not great.

For the record: I wrote this in a Barnes & Noble, and I’ll buy something besides coffee on my way out. Corporate or indie, no one benefits from closing the doors of a bookstore. In this world of ignorance and foolishness, functional illiteracy and TV-deadened imaginations, we need every book.

• This week on (Alleged) Sexual Predators R Us: It’s Scott Baio, Jay Asher (author of Thirteen Reasons Why), Guess co-founder Paul Marciano, and Olympian Shaun White, who decided to distract everyone from his sexual harassment allegations by avoiding female reporters and accidentally stepping on the U.S. flag. Oops. Do yourself a favor: Don’t read any comments. EVER. In the meantime, SAG-AFTRA has established a code of conduct regarding sexual harassment. Let’s see how that goes…

• Speaking of stupid comments, NBC commentator Bode Miller put his foot in it with what he calls a joke, and I’d call a rotten, sexist comment that he later backtracked to call it a joke in the hopes of not looking like a rotten sexist. Basically, according to Bode, women who get married crash and burn because they have husbands to distract them. He’s very sorry.

• I love it when something really awful comes out that gives all the critics a chance to crack open the thesaurus for colorful metaphors on how bad it really, really is. Like 50 Shades Freed is an ignorant, poisonous anti-feminist hate anthem. Funniest take: Fifty Shades Freed: A Spoilereview. “They have sex on the table. Ana giggles. Look, I’m all for having fun during sex, but if I were Christian I’d be concerned about the fact that Ana giggles every time he drops trou.”

• Female and female-identifying horror screenwriters: check out an open call for a filmmaking residency in Bruges, Belgium! And speaking of #WomeninHorrorMonth, here’s nine short horror films by women you can watch online. And as a bonus: Mary Shelley’s handwritten manuscripts of Frankenstein can now be viewed online.

• Bill Paxton’s family is filing a wrongful death suit against his hospital and surgeon, alleging that the surgeon concealed information from them and was unqualified for Paxton’s heart surgery. He died days later of complications from the surgery, at age 61.

• Tyquan Vonricco Washington, nephew of singer Fantasia Barrino, was shot and killed Tuesday in North Carolina. A suspect is in custody, charged with first-degree murder. Barrino is the Season 3 winner of American Idol.

• If you were wondering why they canceled Sex and the City 3, here you go.

• Science fiction author - and my friend - Victor Milan, dammit. Vic died Tuesday of pneumonia as a complication of myeloma, and fuck cancer. Sorry, folks, ye olde blogger cannot be objective as we continue to lose our mentors. Here is my personal obituary of Vic, with all his many accomplishments, and may he walk with the dinosaurs.

• John Gavin, actor in Psycho and Spartacus, age 86. He was this close to playing Bond until Sean Connery decided to come back, and served as SAG president. You know him best as Julius Caesar in Spartacus and Sam Loomis, boyfriend of Janet Leigh’s doomed Marion, in Psycho. Later in life, he served as the U.S. ambassador to Mexico.

• Sneak peek footage of Incredibles 2 aired during the Olympics!

• Yet another preview of Ready Player One, with even more Easter eggs and the theme from Willy Wonka. 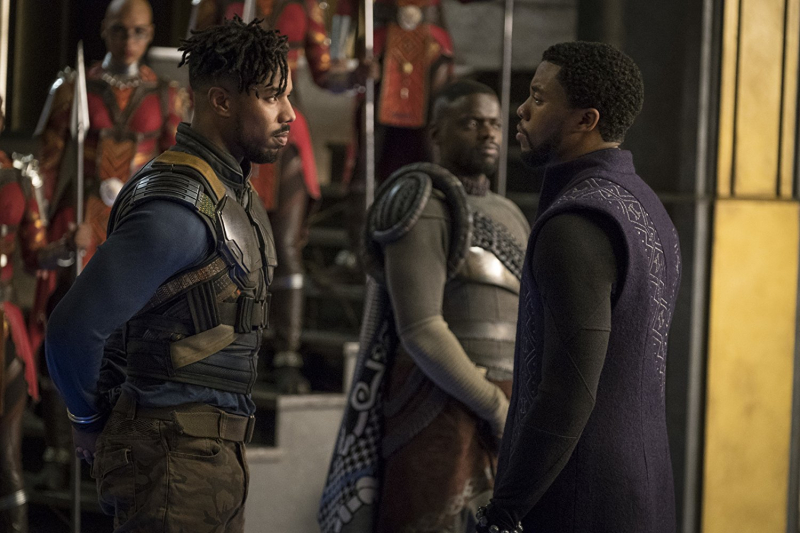 • BLACK PANTHER. What, you think I can talk about this one in anything but all caps? Warning: review contains spoilers. CNN gets it: “More than a movie, ‘Black Panther’ is a movement.” Meanwhile, Octavia Spencer will buy out a theater in Mississippi to help low-income people see the movie. Needless to say, your friendly neighborhood CultureGeek will be in attendance.

• Then I Knew, a news-vid documentary produced by the News-Democrat’s Cara Anthony on the moment people of color realized the impact their race would have on their lives. Soft release a couple of weeks ago; go check it out.

• Samson, starring the werewolf from Twilight as a variation on Conan. Any resemblance to the actual Biblical story is entirely coincidental. (At least from the trailers; no critics have reviewed it yet, which generally is not a good sign.)