Winchester is better than its reviews, but only half of what it could have been.

I made a bet going in that we’d be hit with 20 jump scares, and there were only 15. The fact that I could keep count might tell you something. I picked up on the Big Plot Twist about half an hour early, and I hate when I can see it coming.

While Jason Clarke is a decent actor, there wasn’t as much of it on display as I’d like as the bereaved doctor with a laudanum problem. Helen Mirren as the famous Sarah Winchester is grounded and engaging as always, but you get the feeling this movie was something different when she signed on. Her character is fascinating and focused for the first half, then degenerates in getting wire-yanked around the set and gasping out protestations at the ghosts.

It’s hard to say whether Winchester failed as a sociopolitical metaphor or as a simple haunted house. It’s just not scary enough to stand on its own as the latter, even in a setting as nifty as the Winchester House, and it fails to obey its own rules or stick to a spectral framework with its own logic, which basically required for a ghost story. Whether you’re talking Ghostbusters or Amityville Horror, Poltergeist or American Horror Story, there are rules set by the ghosts that both entrap them and the living, and you can’t just switch them around to be convenient to the plot.

As to the former, it’s possible Winchester could have been saying some serious things about America’s love affair with guns, as both the real and fictional Sarah Winchester believes she is literally haunted (and her family cursed) by the spirits of all those killed by the Winchester repeating rifle. As she snittily points out to visiting Dr. Price who is there to evaluate her sanity, one can hardly say an item is misused when it is being used in the manner it was intended: to kill. 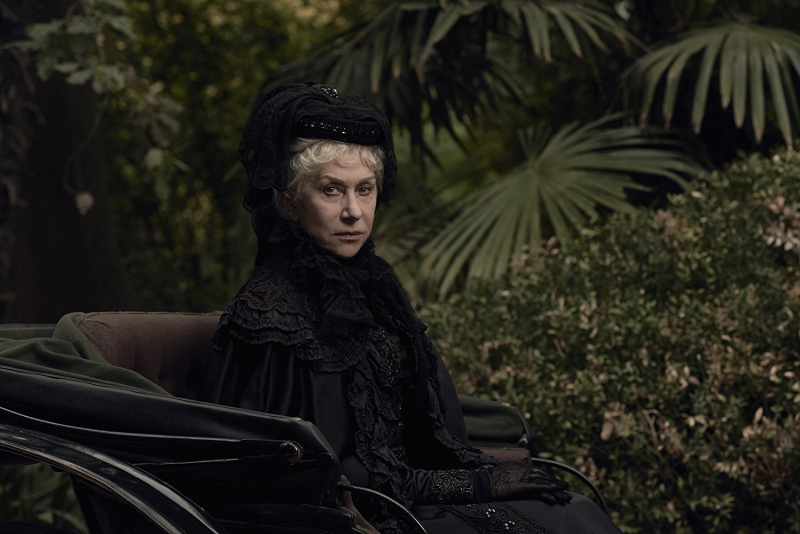 SPOILERS - Winchester could also be talking about the driving hatreds of the Civil War coming back to literally haunt the present day, as the main ghost is a Confederate soldier whose fury against the better-equipped North drove him to murder and horror in life and in death. Both allegories would have made for a serious and interesting horror film, fulfilling the primary purpose of genre fiction: to hold up the mirror before our eyes.

It’s hard to say whether the creators intended any of this, or whether it just came about as a side note to yet another jump scare of a creepy death mask around a corner. It says something that the scariest moment of the movie comes from a hallway of silently open doors.

Still, Winchester deserves much more than its 10 percent on Rotten Tomatoes. Look for the allegories if you wish to keep your brain moving, or shut it off and enjoy creepiness without gore. It moves fast, it’s not boring, and Helen Mirren is in it. That’s generally enough to make it worth your ticket price.