There will be a separate review pending for BLACK PANTHER, which I don’t seem to be able to discuss without all-caps, once I see it for a second time.

For now, the shorthand is: a) amazing movie, even if you don’t follow the MCU; b) while having seen Avengers: Age of Ultron would be helpful, it is not vitally necessary to understand the plot; and c) it might be the most feminist movie of the last ten years, and I only say “might” because Wonder Woman’s protagonist is actually a woman. Go see this movie - hey, catch a flight to Wakanda. 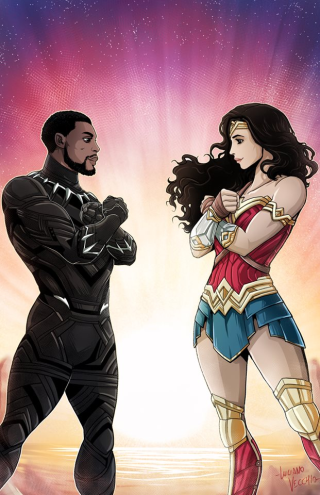 This amazing piece of art is from Luciano Vecchio. https://www.facebook.com/artoflucianovecchio/

In spoilerland…. Here’s an interesting take on what didn’t work in BLACK PANTHER (hint: it wasn’t much) from The Verge. Smart analysis is abounding as long as you stay out of the Idiot Corners of the Internet.

Meanwhile…. before you get all het up about the headline, understand what Variety is talking about with “After ‘Black Panther’ and ‘Wonder Woman,’ It’s Time for the Myth of the Fanboy to Fade.” It’s about Hollywood still pretending that young white males are the only ones with money who go to the movies. And before you insist, “Money talks!” read the article. Or, y’know, check out BLACK PANTHER’s current box office.

Likewise, you might know Danai Gurira as Michonne of The Walking Dead or now as the fearsome and amazing Okoye. But she’s also a Broadway playwright. She wrote Eclipsed, an intense drama set during the Liberian civil war starring Oscar winner Lupita Nyong’o; and Familiar, the story of a family of Zimbabwean immigrants preparing for a wedding, which was performed at Yale Repertory and Off-Broadway.

When you see it? Stay all the way through the credits. I mean, you know that, because you’re geeks. But I saw people getting up to leave after the first post-credits scene. Rookie mistake.

• Speaking of the Panther crew, Avengers: Infinity War is premiering a week earlier than planned, on April 27. Check out io9’s report for the hilarious, cheeky Twitter exchange between Robert Downey Jr. and Marvel in announcing the move. (Likely this is to give more space to Solo.)

• Calling all Disney Nerds! If you’re like me and your house is basically a tribute temple to the Mouse, you have a new destination in Downtown Disney at Disneyland. Disney Home is a a home-decor store entirely focused on Disney home goods. Beauty and the Beast plates and cups, Neverland kitchen towels, Minnie-bow canisters, Mickey teapots… wait, where is the online component, because WANT. What do you mean, there isn’t one??

• A very rare 1820s copy of the Declaration of Independence was found… no, not with Nicolas Cage. Behind wallpaper. Okay, technically it was behind wallpaper for a while, then later sat in a broken frame behind a cabinet in a dusty office. And it’s in better condition than the original. Everything bad that could have happened to the original has happened, according to the article, which explains why it was practically unreadable when CultureGeek Jr. and I saw it. Still, he describes it as an incredibly moving experience.

• Dolly Parton donates her 100 millionth book, deemed by Mashable as the last good person left in America. Parton’s Imagination Library sends free books to children from birth to starting school; she says she was inspired by her father’s illiteracy. She has also donated more than $8 million to the people left homeless by Tennessee wildfires in 2016.

• Here’s a Washington Post profile of actress Laurie Metcalf, native of Edwardsville, Ill. and a working actress for 40 years before she’s suddenly a finalist for the Oscar. She won a trio of Emmys for Roseanne and is inexplicably returning for the misbegotten revival, as she claims her Tony for Nora in A Doll’s House Part 2 and awaits Oscar night for Ladybird.

• Meanwhile, Barbra Streisand gives a rare interview, two hours discussing what it was like to battle sexism in Hollywood before it was trendy. She was the first woman to star, direct, produce and co-write a major studio film, and also the first woman composer to win best song at the Oscars in addition to her collection of Emmys, Grammys and acting Oscars. She was overlooked as director over and over even when her Prince of Tides was nominated for best picture, so it was a bit of “sweet justice” to present Kathryn Bigelow with the director Oscar for The Hurt Locker, still the only woman director so honored. There is exactly one paragraph in Variety’s long spiel about her dogs, but guess what part of it is trending? *headdesk* There are more trails left to blaze.

• Netflix will have 700 original series online in 2018 - that’s not a typo - and spend $8 billion on content. In addition, they’ve greenlit 80 original movies. Variety details their strategy for world domination.

• On Friday the 13th, you may be allowed to tour and camp at the filming location of Friday the 13th. It’s usually a Boy Scout campground - try not to think too hard about that - and has only opened to the public five times. You’ll also get to meet original Final Girl Adrienne King. Victims must be at least 15 to visit and 21 to stay overnight.

• Freelancers owed collectively $80,000 by Ebony Magazine will be paid in full under a settlement announced this week by the National Writers Union, representing 45 freelancers who were not paid by the new owners of the iconic African-American magazine. In short: freelancers actually win against a major corporation. Really?

• Hogwarts fans, here’s something to empty your bank account. I want!

• Bud Luckey, writer, animator and composer best known for classic animations on Sesame Street in which he wrote the songs, drew the animation and provided the vocals. Outside Sesame Street, he did design work for Pixar on Toy Story, Monsters Inc., Finding Nemo and more, and wrote (and performed) the Pixar short Boundin. He voiced Chuckles the Clown in Toy Story 3 and Eeyore in Winnie the Pooh.

• Actress Emma Chambers, 53, best known for The Vicar of Dibley and Notting Hill.

• Chappaquiddick released its final trailer “based on the untold true story.” I’m not sure any part of that story remains untold after all these years, but I’m interested nonetheless.

• If you liked Michael B. Jordan as Killmonger, think about catching him in his next role: HBO’s remake of Fahrenheit 451. The trailer is far more disturbing and intriguing than the original film, in my opinion, and quite relevant.

• The wildly irresponsible Death Wish, because what we need in America is a pissed-off shaved-bald white guy loaded down with weapons shooting at people who may or may not be criminals. I could expound further on how I feel about the trailers for this movie, but my blood pressure can’t take it.

• Red Sparrow, which intrigues me since I liked it pretty well when it was titled La Femme Nikita or Point of No Return. Also Jennifer Lawrence, who is pretty much awesome in everything she does.

Next weekend is Midsouthcon, so if you're in the Memphis area, stop by and visit with your Friendly Neighborhood CultureGeek! I'll be on several panels regarding the horror genre with uber-editor Ellen Datlow, attempting not to fangirl too much. There may not be a Linkspam until I get back, so lay chilly!