CultureGeek ventures near the Murder House

Oh, American Horror Story. I’ve quit you. And then you do this.

Next season will be a crossover between Murder House and Coven, which were two seasons I actually managed to watch. Look, I stuck with it a long ways, but my taste for horror is of the creepy, chilling Twilight Zone variety, not “let’s count the ways we can rape” and eyeball-gouging with grapefruit spoons.

So AHS is trying to go back to its roots after last year’s politically-themed Cult dropped down from Roanoake’s levels set in 2016. Hilariously, the lowest-ranked premiere was the first season for Murder House in 2012, before anyone had the slightest idea what the hell American Horror Story was about.

I might be dragged kicking and screaming to try yet another season. But I’m honestly losing my patience with shows that only seem to exist in order to drag me from gory death to gory death (Walking Dead, I'm looking at you).

• Locals: The 18th annual Whitaker St. Louis Filmmakers Showcase will screen 20 films at Washington University on July 13-15 and 20-22, hosted by nonprofit Cinema St. Louis. Closing night awards will be presented at a free celebration at Blueberry Hill. Showcawe films will be chosen for inclusion in the St. Louis International Film Festival. Tickets are $13; $10 for students and Cinema St. Louis members and can be purchased at brownpapertickets.com.

• If you can bear it, scan through Newsweek’s recounting of the 50 best-selling singles in U.S. history, and the oldest one is from 1997. Oh, my youth hurts.

• Locals: SIUE’s Beauty and the Beast opens tonight and runs through June 24. I am in no way objective; it’s my son’s collegiate theatrical debut and he was co-designer on the project, helping to build and design the sets and some of the special effects. So if you go, watch for the Lonely Villager/Wolf/Spoon, and enjoy the show!

• This Week in Sexual Harassment: Not long after Star Wars actresses Daisy Ridley and Kelly Marie Tran left Instagram due to constant harassment and abuse, 14-year-old Millie Bobby Brown of Stranger Things has left Twitter. It seems some idiot Photoshopped her into awful homophobic memes with a hashtag #TakeDownMillieBobbyBrown, which just goes to show that the internet is entirely populated with cretins. She’s fourteen, you dipshits.

Also, follow this Twitter thread from Anne Wheaton on the horrific harassment she endured at BookExpo America, where apparently an attractive female writer cannot be taken seriously unless she’s willing to sleep with middle-aged buyers.

• Cue the fanwank! A released photo from Wonder Woman 2 appears to show a confused Steve Trevor in 1984, the setting for the sequel. Did Steve somehow survive the cataclysm of Wonder Woman’s finale? Is it Steve’s great-grandson, like in the comics? (Which is kinda squicky, but remember Captain America and Carter’s great-granddaughter? On second thought, don’t.) If it’s Steve, how come Diana still seems to be mourning him into the 21st century? Though I rather like the idea that this time, it's Steve who's the fish out of the cultural water. Filming has begun with Kristen Wiig as Cheetah and - we hope - a cameo for Lynda Carter. • Ordinarily I’d be really happy that Ewan McGregor will play Danny Torrance in Doctor Sleep, based on Stephen King’s sequel to The Shining. Unfortunately, I was deeply disappointed in Doctor Sleep, which had an uneven plot structure and serious retcons - if you’re going to do a sequel or prequel, continuity is king. Still, Danny has had some serious demons to fight all these years, and McGregor has the ability to … shine in the role. (Hee.)

• Happy 81st birthday to my family’s namesake, Donald Duck! I do a fair Donald-quack, but it doesn’t translate well in print. So here’s a picture instead. 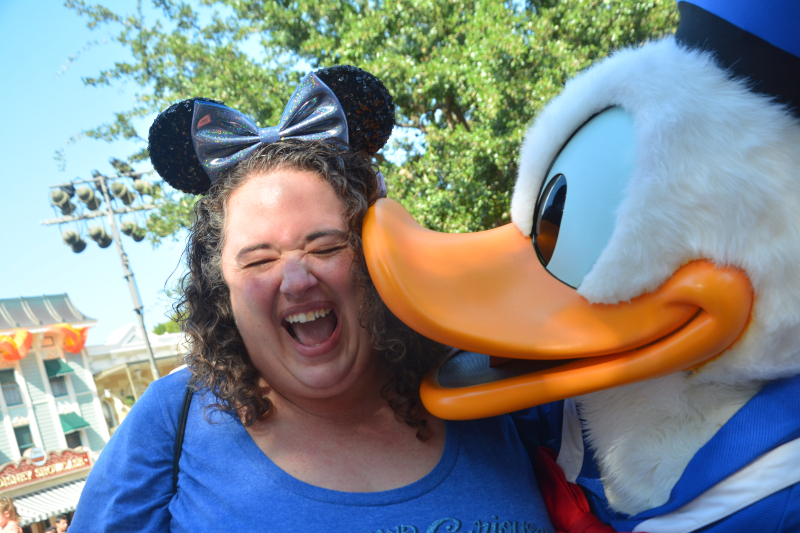 • Tony Awards went to The Band’s Visit, Laurie Metcalf of Edwardsville for Three Tall Women, and several other people who weren’t in Mean Girls. Details here.

• There will not be a Defenders Season 2. I’m not sure if I’m happy or sad about this; I was fairly neutral on Defenders and thought it could have been a lot of fun if not for the storyline drawn from Iron Fist, which we all hated. Oh well, at least we’ll get more time with Jessica Jones and Luke Cage - the latter’s second season hits June 22 and reviews say it’s one of the rare ones that outshines the original.

• Apex Books is helping to raise funds for author Brian Keene, who was badly burned in an accident and does not have health insurance. All proceeds of direct ebook sales of Keene’s solo novels with Apex will be donated directly to him. The GoFundMe continues and is within a few hundred of its $55,000 goal, but early estimates now put Keene’s medical costs as $300,000.

• Firefly. Still bitter. You can’t take the sky from me.

• Jackson Odell, 20, best known for The Goldbergs and iCarly. An actor and singer/songwriter since the age of twelve, he was found unresponsive last Friday in a sober living facility.

• Alan O’Neill, 47, best known as an Irish gun-runner on Sons of Anarchy, apparently of a heart attack. O’Neill was born in Ireland - so yes, the accent was real - and worked on the Irish TV series Fair City as well.

• Jerry Maren, 98, last of the original 124 Wizard of Oz Munchkins who sang as part of the Lollipop Guild in the 1939 classic, presenting an oversized candy to Judy Garland. Maren also appeared in The Twilight Zone, Bewitched and Seinfeld, among many others.

• Anthony Bourdain, 61, chef and travel journalist, of apparent suicide. I hardly need to expound on this, since it was extensively covered by everyone, but the repercussions on his death continue days later (and the idiotic conspiracy theories).

• Funny. Sometimes a trailer keeps you all the way to the end, then loses you at the title. Unfriended: Dark Web was probably trying to draw on audience from the first one, but in this case, a truly creepy trailer gravely disappointed me by being connected to that lameness.

• I usually stick to feature films for the trailers because these days everything from books to TV episodes to Shakespeare in the Park gets a trailer. But this Netflixer of Gillian Flynn’s Sharp Objects is particularly choice.

• Here’s my question about Serenity, which has nothing to do with Firefly, alas. Matthew McConoughey’s ex-wife, Anne Hathaway, asks him to help her do away with her current husband, who’s an abusive monster. Um. Is there any reason she can’t just call the police? Amazing cast includes Jason Clarke, Djimon Hounsou, Jeremy Strong, Diane Lane… very high-end for a potboiler. So hopefully there’s more to it than just the tagline.

• If you haven’t had enough Conjuring jump scares, The Nun is now pending. The trailer is nicely creepy, though I have serious misgivings about the admittedly entertaining Conjuring series.

• I’m still dumb-founded about giving Disney’s Dumbo to Tim Burton. (See what I did there?) Longtime Disney fans are curled into fetal positions remembering Alice in Wonderland and Charlie and the Chocolate Factory. The teaser is out, and so far we don’t hate it. It looks like there are big story changes - Colin Farrell has two kids who help take care of Dumbo, Michael Keaton is an entnrepreneur who recruits Dumbo (separate from ringmaster Danny Devito); and we don’t see Timothy the Mouse or wisecracking punster crows anywhere.

• Incredibles 2, the movie we’ve all been waiting for seemingly forever. Reviews are strong, but it’s not like it matters: It’s Disney/Pixar, and we’re all going to see it because the first was… Incredible.

• Tag, in which grown men disrupt each other’s lives in an annual dick-measuring contest to see who’s the best. Or something. Unimpressed.

• Superfly, a remake of the blaxploitation original starring Trevor Jackson as Youngblood Priest. So far it’s not resonating with critics; 54 percent on Rotten Tomatoes.

• Gotti, with John Travolta aiming for serious as the notorious crime boss of New York City. Someone pointed out that there are 44 credited producers on the movie, for which the reviewers rolled out their best terms: derivative, borderline nonsensical, connect-the-dots disaster, dismal mess… It has a zero percent on Rotten Tomatoes. Ouch.

Finally: I made a big announcement this week, one that might affect this blog and definitely affects the rest of my work. Click here to find out what shenanigans are pending.