Happy 100th birthday to Captain America! Otherwise known as Superman, until the real Superman comes back to the movies, Cap currently carries the banner for truth, justice and the American way.

How did we come up with this “birthday”? Someone zoomed in on Cap’s initial 4-F card for the Army and his birthdate is listed as July 4, 1918. Of course he was born on the Fourth of July. 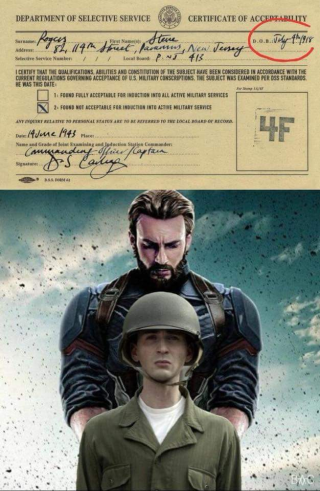 And since there’s not been as perfect a match between actor and role since Christopher Reeve donned the red cape as the Man of Steel, Chris Evans had this to say on Independence Day:

Happy 4th everyone!! I love this country and I’m proud of how far we’ve come. Be safe today! Also, Happy Birthday to a very good friend of mine. I hear 100 is the new 20

• I try not to delve into politics on this blog. But I cannot let the #SecondCivilWarLetters go unmentioned… hee hee hee, sorry, I just read another one. The hashtag went wild after Alex Jones of InfoWars declared that Democrats (or liberals, I’m not sure which, he seems to think they’re interchangeable) planned a civil war launch on the Fourth of July. Thus began a cavalcade of internet snark unmatched in my experience - and, actually, very well written in most cases. It takes some skill to match the tone and language of an actual Civil War letter. And… tee hee hee… Sorry, I got distracted again. Go to Twitter and hit the hashtag, but only if you have several hours free, and try not to drink anything near your keyboard.

• A plus-size superhero? I’m casting the side-eye at all my comic-nerd pals, because not one of you has ever mentioned Faith to me. A superhero who actually looks like me (but with cuter hair)? And they’re making her into a movie. I’m braced for the Asshat Brigade that drove Daisy Ridley and Kelly Marie Tran off social media for being female in Star Wars, and I hope the actress who lands the role is as well. In the meantime, I’d best go look up some Faith comics!

• Wait, I thought movie theaters were suffering oh so much because awful MoviePass was letting people of limited means actually see movies on a budget. Those poor movie theaters with their box office up 29 percent over this time last year, a five-year high…

• My friend Kelly Chandler found the most awesome ad display for Luke Cage … in Paris. No, I haven’t seen the second season yet; I’m still soldiering my way through Handmaid’s Tale, and then I’m up for Luke again.

• Ghost fans: Riverfront Times has a roundup of St. Louis ghost stories, which they call urban legends. Lemp Mansion and the Collinsville Seven Gates of Hell are prominently featured.

• Have you wondered what Nicolas Cage was up to these days? If you guessed Spider-Man, you’d be right! And not as the villain - as Spidey! Wait, what?

• Best Buy stops selling CDs. But no one is weeping, because we all buy our music on iTunes anyway and we haven’t bought them at Best Buy since Amazon showed us Best Buy was soaking us for 20 percent more.

• Hollywood Reporter has all the details of the live-action Aladdin, starring Mena Massoud, Naomi Scott and Will Smith as the Genie. Alan Menken has made up some new tunes, there’s a new character (Jasmine’s handmaiden), the Middle Eastern roles are actually played by Middle Eastern actors because Disney eventually learns, and Sherlock Holmes director Guy Ritchie is directing. Release is set for Memorial Day 2019. 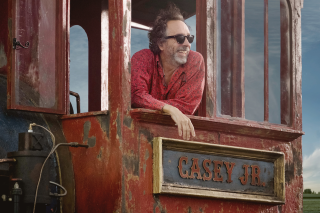 What else is coming for live-action Disney? The Tim Burton Dumbo, which sounds like the beginning of a bad joke, but the trailer didn’t horrify us and that’s about all I can ask of Tim Burton getting his hands on yet more of my childhood. Of course we know Christopher Robin is pending, as well as a second Maleficent movie following the fairytales of Cinderella, Beauty and the Beast, The Jungle Book (again) and Pete’s Dragon.

Live-action The Lion King is slated for July 2019, with James Earl Jones returning along with Donald Glover as Simba, John Oliver as Zazu (perfect), Alfre Woodard, Beyonce and a few other people you might’ve heard of.

Mulan drops in March 2020, and following that will be Pinocchio, Oliver Twist (starring Ice Cube?), James and the Giant Peach (again), Cruella, Tink, Peter Pan (again), Lady and the Tramp, The Sword in the Stone (oooo), Snow White, The Little Mermaid (with new songs co-written by Menken and Lin-Manuel Miranda, who is co-producing)…

And Prince Charming, stealing a concept from Fables comics that the prince is actually ONE prince who romances Snow White, Cinderella and Sleeping Beauty, but telling it through the eyes of his brother, who never quite lived up to expectations. Directed by Stephen Chbosky of The Perks of Being a Wallflower and the live-action Beauty and the Beast, it’s pending.

• This Week in Sexual Harassment News: Kevin Spacey faces new allegations of sexual misconduct, which are being reviewed by London police.

• I said at the time that I didn’t have words for the death of Harlan Ellison, the flawed genius of speculative fiction (please don’t call it sci-fi) who passed away the same day as the Annapolis shooting. Much has been written about Ellison, both positive and negative - everyone who ever met him has a Harlan Ellison story, and I am no exception. To understand Ellison, watch a documentary titled Dreams With Sharp Teeth. It is a well-directed, entertaining look at the man and the work, while unflinching at his controversies, legal battles, and the varying reputation he held in the craft.

• Dame Gillian Lynne, 92, Tony-nominated choreographer of Cats and Phantom of the Opera. Beginning as a ballerina in 1946, she worked on seven Broadway shows, including three with Andrew Lloyd Webber and the 2004 Phantom film. Lloyd Webber renamed the West End’s New London Theater as the Gillian Lynne Theatre, the first non-royal woman to receive the honor. Married for 40 years, her husband announced her passing on July 1.

• Skyscraper finally gets a new trailer, and we stopped making fun of it and arguing whether it was a ripoff of Die Hard or The Towering Inferno. Instead, it actually looks like a movie we might want to see, since we like Dwayne Johnson and I adore Neve Campbell (why the hell wasn’t she in any of the previous trailers that looked so lame?)

• Summer of ’84, yet another bounce on Stranger Things but with more satire for both the 80s and silly slashers. Though honestly, I think they get the 80s better than Stranger Things, but I haven’t seen Season 2 yet.

• Ant-Man and the Wasp, because it’s summer and superheroes are required.

• The First Purge, whose trailers actually give this absurd premise for a franchise enough of a hint at social commentary that I’m actually interested in it.

• Whitney, a documentary about the late Whitney Houston and her transcendent voice.