Look, I can't read everything. I'm sorry to say Captain Marvel as a character was pretty much unknown to me, except as one of those comic-book characters who had had multiple identities over the years - you know, like Batman, Robin/Nightwing/Whatever, Captain America, Spider-man, Green Lantern.... So I really wasn't sure why everyone was all crazy about Captain Marvel premiering as Carol Danvers except, y'know, she's a girl. Eeeek! 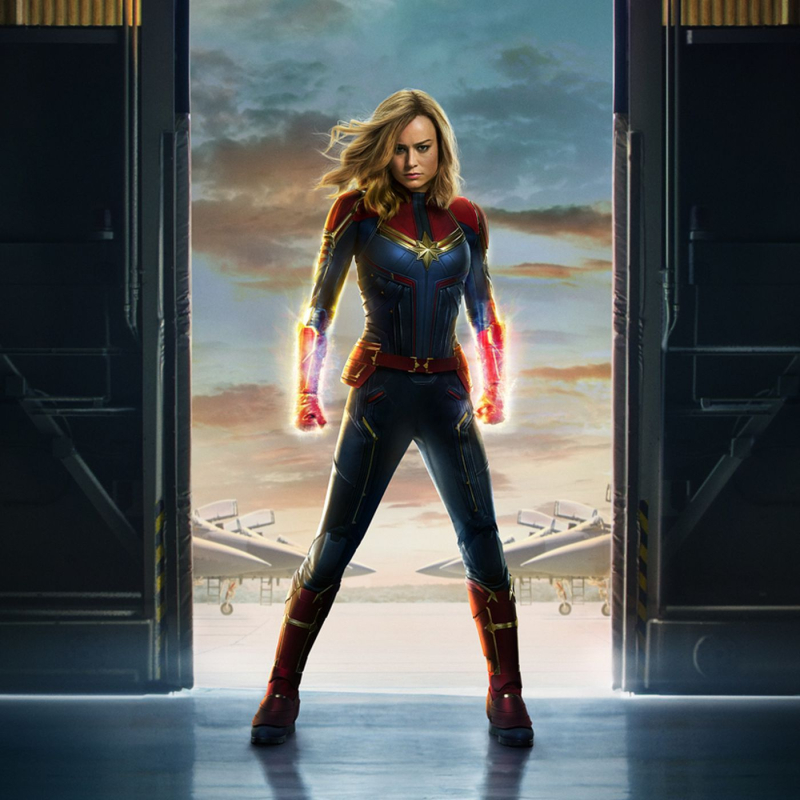 If you're looking for a deconstruction of angry fanboy wails regarding the emasculation of the American hero, eh. Here we want to talk about the movie itself, apart from the extracurricular nonsense surrounding the "inevitable decline" of a franchise following a $455 million worldwide premiere weekend. Ahem.

And I have to agree with Alicia Lutes of Variety who said Captain Marvel was... fine. It was enjoyable, far less eye-rolling than some of the MCU (Ragnarok, I'm lookin' at you) and a fun outing with introduction to a character I liked. It was not, however, the best superhero film ever or the best of the MCU, frankly. I had quibbles, but they're minor and spoilery, and I know that several of you have not seen it yet (including some of my guest reviewers, sadly...)

But it's okay. Because as Lutes pointed out, a female-led superhero movie should not have to be THE BEST EVER in order to take its place in the franchise. Bearing a strong resemblance to the real workplace, a woman-led film apparently must be four times as profitable and ten times as good as the lousiest male-led film in order to be considered "equal." So it needs to be okay that Captain Marvel is okay, and not put in a cage match with Wonder Woman* or the eternally pending Black Widow, because what's good for one is good for all. It was fun, never dragged, and I loved the "stand up" montage (you know what I mean, I'm dancing around the spoilers here) and final confrontation.

It was fun, and a worthy addition to the MCU. Should you see it? Absolutely, but it really wasn't a question, was it? By now you're either dialed in to the MCU series or not (and if not, here's your catchup list), and just like the comics' Crisis of Infinite Crossovers, you gotta see them all. Fortunately, Captain Marvel will be one of the more enjoyable chapters (Ragnarok, still lookin' at you).

Now hear from some of our guest reviewers - at least, the ones who were there on opening weekend. Because of course we were.

* Seriously, can we not with the "Wonder Woman or Captain Marvel" crap? The answer is: both.

Captain Marvel works as both a celebration of ”girl power” and the human spirit. The movie fills in some gaps for longtime MCU viewers, offering new looks at Fury, Coulson, and some Kree baddies we've seen before.

Carol Danvers’ comic book origins saw her as a supporting character in another hero’s book: the male Kree warrior Mar-Vell, who had turned against his warlike race to protect the Earth. She was one of several superheroines to be born in a male hero’s shadow, along with Supergirl, Batgirl, and Batwoman at DC Comics, or She-Hulk, the Wasp, and (at least by name association) Spider-Woman at Marvel Comics.

But Carol did something none of those others did: She outlived the male hero who had preceded her and inspired her original identity of Ms. Marvel. He died in the 1982 graphics novel The Death of Captain Marvel. Carol Danvers drifted around for years under a few aliases, and a couple of other people took the name Captain Marvel before Carol finally got the title. (In the comics, she's an Air Force major and outranks Captain America).

Brie Larson and Samuel L. Jackson play off each other well. There was more of Annette Bening than I expected, and her few scenes cover a broad range. And Goose (played by four orange cats) steals every scene he's in, as cats do. Great fun with an on-point soundtrack of 90s hits, many by female artists.

I’ve been a fan of comics since I was around 12 years old. That was the age I started collecting and reading the many different titles I loved. By the time I started reading them, Captain Marvel was long gone and Ms. Marvel had been turned into a normal person (and inactive) thanks to Rogue of the Brotherhood of Evil Mutants. I did read the storyline how Carol Danvers had become Binary, but other than that I had very little knowledge of her.

Why does this matter? I went into this movie blind, with no notion of the character and no expectations. How was it for me? Pretty good!

Brie Larson as Carol Danvers gave a good performance as someone trying to find her way as a hero, a person, and a friend to those around her. Samuel Jackson as Nick Fury was his usual awesome self, but the real scene-stealer was Goose the cat. A funny addition to the movie and worth every time the little guy was on screen.

Nitpick: Sometimes the CGI was meh, but most of the time it was the high quality we expect from Marvel.

How well would I stack this movie with the other films? It is just as good as Ant-Man and Dr. Strange as far as origin movies go. For me it was fun, exciting, and a good addition to the MCU, and I look forward to seeing Captain Marvel in Avengers: Endgame. As for the controversy around this film? Not worth my time to address. Go see the movie and enjoy it if you want.

This is Marvel Studios first female-led superhero picture, and I enjoyed it very much. For someone like me who hasn’t read the comics or knows very little about the character and story, it was different from any others I’ve seen.

Captain Marvel took these two basic plot lines and mixed them all into one. It started out like a Thor story, where the hero finds this planet with puny lifeforms and feels a need to protect them. But they made an excellent choice in making her story more Captain America than Thor.

Captain Marvel was extremely enjoyable, especially for someone like me who appreciates a message behind the story and the cinematography. If you’re someone who has been up to date on everything MCU and Avengers, then you’ll see Captain Marvel and see that she is a great addition to the roster that will help the Avengers defeat Thanos.

And you don’t HAVE to be a die-hard Marvel nerd to enjoy and understand this movie. There are quite a few scenes that call back to the Avengers movies, but those are not the backbone of the plot. Even if you haven’t seen every Marvel in the past decade, I still think you’ll quite enjoy it as well. It has a strong, empowering feminist message, a compelling story and a cast of good characters that you will grow to know and love.

As good as this movie is, it still had the power to hype up Avengers 4 to an even bigger level (obviously). It’s not like Marvel NEEDED another reason for fans to go see Avengers 4. But I think it’s going to be so satisfying watching both Captains, Steve Rogers and Carol Danvers, fighting side by side. Heroes EVERYBODY can look up to, no matter the gender.

I think this is good start to something they should’ve done long ago: Breaking barriers, proving that female superheroes are just as capable and engaging (and sometimes better than) the others. I agree that it should’ve been done this long ago, but I’m just glad we’re realizing it now... and inspiring the little ones as they watch Captain Marvel and Captain America fight side by side, as equals.