Guest Voices: In defense of Thor the Voluminous

(Hark! There be spoilers for Avengers: Endgame here.)

Outrage is the modern zeitgeist, so of course, people Had Opinions about Avengers: Endgame. Some feminists felt it was outrageous that the film had forced Brie Larson to play a sexualized version of Captain Marvel who wore — horrors — makeup. (Never mind that actress Brie Larson chose Carol Danvers’ look and we got a great “woman power” scene in the climactic battle.)

But I’ve also seen some ink spilled and some pixels lit up over the portrayal of Thor in the movie. After a first-act, post-Snap showdown with Thanos — in which Thor “aims for the neck” as he failed to do in Infinity War and cleaves the Mad Titan’s head from his shoulders — we flash forward five years and the world has changed.

Captain America’s leading a grief counseling group. Hawkeye — now dressed in the Ronin costume a couple of people have worn in the comics — is killing bad guys who didn’t get Snapped away. We don’t see Rocket making viral videos mocking people, but you just know he is. And Thor?

Well, Tony Stark calls him “Lebowski” at one point, and it’s a fitting comparison. Chris Hemsworth donned one of Hollywood’s infamous “fat suits” and put weights on his wrists and ankles to change his gait into that of an Asgardian with PTSD who buries his pain and guilt in alcohol and fighting with Fortnite trolls online. (If you think of Thor’s alien pals Korg and Miek as “Donny and Walter,” really we’re just a Kenny Rogers song and a White Russian away from a complete homage.)

And, oh, do people Have Opinions about that. “Fat-shaming” is the common refrain. Rocket says Thor looks like “melted ice cream,” and when Thor later asks “What do you think runs through my veins?” (the answer is supposed to be “lightning”), War Machine asks “Cheez Whiz?” Even Thor’s mother, Frigga (encountered in the “time heist” portion of the movie shortly before her death in the dismal Thor: The Dark World), tells him to “eat a salad” among her last words with him.

That’s it, really. There’s physical humor of him giving Rocket a hug, and our alien scrapper struggling to get away from the beer gut, and Thor and Hulk both have trouble turning around in the small Norwegian house Thor calls home in New Asgard.

I was about 10 years old when I was first groped by a boy who took my daring to develop the medical condition gynecomastia (look it up) as a sign that I was girl-like and ripe for exploitation. Thor’s slight case of “man-boobs” and protruding belly reminded me of myself in my thinner days, but I wasn’t triggered by the sight — or the jokes — at all. Not in context.

The Avengers are, for one thing, old friends who have busted each other’s chops for years. Of the four weight-related remarks I heard in the movie, one was Iron Man calling Thor “Lebowski,” and as I’ve noted, they disheveled his hair and beard and dressed him in a bathrobe for much of the film. It was a whole persona being acknowledged, not a weight joke. 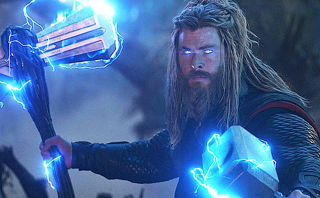 A mother telling her child to eat more healthily? That’s not an insult. We might laugh, but it’s a gentle laugh — mothers are mothers, even on Asgard, even in emotionally fraught moments. (Without the words ever being said aloud, Rene Russo plays Frigga as a woman who realizes her son’s demeanor is that of an orphan, and his attempts to warn her — which she shuts down — send a clear message her death is at hand. Yet she worries about him.)

That leaves Rocket and War Machine’s food-related comments. Rocket is a member of the Guardians of the Galaxy, who embrace their lot as “a bunch of a-holes.” He snarks at everyone; but he also delivers the most powerful speech about shared loss to ever come from a CGI raccoon-like creature (even if everyone in Asgard seems to think he’s a rabbit).

And War Machine? James Rhodes is a military guy. The Air Force may rely more on brains than physical brawn, but there’s a military idealization of physical perfection to be considered here. (He’s also Tony Stark’s best friend, and how do you do that without knowing how to give as good as you get in the game of insults?)

But that military angle sticks out to me as important to consider. War Machine, Captain America, and Captain Marvel are all military veterans. The Black Widow and Hawkeye/Ronin are former SHIELD operatives — black ops of a sort — essentially special forces. Rocket Raccoon is a mercenary adventurer, and Nebula has been engineered to be a living weapon. Of the humanoids, they’re all what would often be called perfect physical specimens — in some cases, enhanced beyond that.

Iron Man and The Hulk stand apart as a billionaire playboy genius and a nuclear scientist, respectively. And the Hulk is actually quite gentle and caring for Thor, trying to pull him out of his funk the same way Thor helped him in Ragnarok.

Thor, as a Viking warrior, was like most of the rest for most of the time we’ve seen him on screen, chiseled. But now he’s on the road to turning into his fallen friend Volstagg the Voluminous, who died along with the other Warriors Three in Ragnarok. Volstagg’s appetites for food and battle were unmatched, and there were jokes about him that I don’t recall provoking so much outrage, but no one questioned his bravery. Volstagg was worthy.

And so is Thor. The enchanted hammer Mjolnir tells us so, coming to Thor’s hand just before he and Rocket leave the Asgard of the past to return to the present. And in the final battle, when we see Thor get a magical makeover that tames his hair and turns his pajamas to battle armor — but doesn’t do liposuction — we see he’s as fierce as ever. Thor’s worthy, as is Captain America, as Mjolnir drives home in the heat of battle.

So yes, there are jokes about Thor’s weight. And a more enlightened set of Avengers might have called Rhodey or Rocket on them, though the latter, at least, I fear is a lost cause.  But let’s not overlook how much progress this film series has made. From the first Avengers movie where The Black Widow was the only woman on the field in the Battle of New York (in a scene we see recreated here), now we have a legion of heroines who put a hurting on Thanos in the final act. A number of characters have disabilities or missing body parts: Winter Soldier, Nick Fury, possibly The Hulk now, War Machine, Nebula, and are we sure Drax isn’t brain damaged? He was in the comics.

As Miles Morales says in a Marvel movie from last year (Spider-Man: Into the Spider-Verse), Spider-Man can be anyone. Anyone can wear that mask. The Marvel Cinematic Universe isn’t quite saying that “anyone can be a superhero” — it helps to be military-trained, royalty, or a super-genius — but it is giving a signal that it’s not just the white guys in domino masks or strongman tights who started the whole craze in the late 1930s.

And Ant-Man, the Wasp, and now Thor show that heroes come in a variety of sizes. I hope Thor’s time with the Guardians doesn’t shrink him back to standard size too quickly.