Another roar at Pride Rock

There is almost nothing new about The Lion King.

One of the big attractions from this sort-of-live-action remake (we'll get to that in a minute) was the inspired casting. Donald Glover and Beyonce inherit the claws of our leading lions with grace, and in both acting and singing, they roar with the best of them. It was only fitting that James Earl Jones was the returning cast member, as no one in the world could follow in his paw-steps as Mufasa. John Kani can't be the ghost of Robert Guillaume and fortunately he doesn't try. Alfre Woodard is a dignified and intense Sarabi, and while Billy Eichner and Seth Rogan really can't match Nathan Lane and Ernie Sabella, they do Timon and Pumbaa proud. And John Oliver is inspired casting as Zazu.

The only one who suffers is Scar, which surprised me as Chiwetel Ejiofor is no slouch at all to being quietly menacing (as all Firefly fans know). Perhaps it's simply that Jeremy Irons' voice is impossible to follow, or perhaps it's that his big number, "Be Prepared," is the only one to get a major rewrite and they should have left it alone. Supposedly Benedict Cumberbatch turned down the role, which might've been interesting to hear with his sinister bass, but I'm not sure anyone could have resolved the mishmash that they made of "Be Prepared." (Rumor has it the number was going to be left out entirely due to the Nazi metaphor from the animated version, but people threw fits, so they worked it in even thought Chiwetel really can't sing, and excised the metaphor, and yeah, it's a mess.) 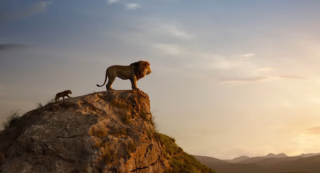 Cinderella gave its heroine more of a backbone and a greater connection to Prince Charming, as well as a motivation and history with the Evil stepmother. Beauty and the Beast solved some of those irksome plot holes from the animated version, like why the entire kingdom forgot it had a prince, why all the poor servants were cursed too, what happened to Belle's mom, and so on. Aladdin attempted to resolve some of the queasy stereotypes from the original animated and turned much of the plot on its ear, resulting in Jasmine's rise as the true protagonist of the story and shifting away from "will they or won't they get married" as the primary conflict. (Also, "Speechless" is as kickass an empowerment song as "Let it Go" or "How Far I'll Go." Fight me.)

Lion King doesn't do any of that. There are a few hints at a backstory we never see, a long-ago love triangle between Sarabi, Mufasa and Scar, which would add a little nuance and malice to Scar's actions and tie it closer to the Shakespearean source material... if we ever got to see it. Unfortunately it's just a few throwaway lines, and then we're back to a shot-for-shot remake of the original.

Why go see an allegedly "live-action" remake that is so utterly faithful it practically copies the camera angles from an animated film from 25 years ago? When you probably saw it in the theater, bought the clamshell VHS, bought the Gold Collection DVD, and now probably have it on Blu-ray as well? When you grew up singing its songs and taught them to your kids? Why see a slavishly-faithful remake that takes zero chances with the story that made Disney nearly $1 billion in unadjusted dollars on a $45 million investment?

Because it is, quite simply, the most amazing visual achievement in cinema I can ever recall seeing in a theater.

We all know lions don't sing or dance, right? I mean, I'm pretty sure on that point. I am less sure after watching The Lion King in its current iteration, and when I saw that the production crew thanked the staff of Animal Kingdom, I wondered if they were training the critters at night and just telling us this is CGI.

It was simply impossible to tell that I was watching a CGI-animated film, which was initially billed as "live-action" and then was mocked relentlessly until Disney quietly dropped that line from the promo. It's a fair point; it's still animation, just a very different kind than the ground-breaking visual style that ushered in Lion King in 1994.

Even though the entire opening sequence is an homage to the original, shot for shot and moment for moment, I found myself gaping at the screen as CultureGeek Jr. and I marveled at the amazing state of the art that created this film. Visually it was an astounding piece of artwork, bringing lions and hyenas and antelope to life before our eyes, making them sing and talk without a hint of silliness, and all in the shadow of what appears to be Mt. Kilimanjaro.

The Lion King was never my favorite of the Disney Renaissance, but it's always been a fun movie that shaded a little darker and more adult than its predecessors. It's Hamlet with lions, and the very few changes by director Jon Favreau don't change that.

And yet I still tell you to go see it.  If you didn't like the original, you won't find anything new here. If you liked the original, you'll probably like this one. But it also represents an amazing new state of the art in filmmaking, and while I wish they'd have brought something new to the tale of Simba and his compatriots, I tip my hat to the artists who drew this new picture for us.