Today we celebrate our Independence Day

That's a famous line from a famous speech, and nobody really cares that it's trite and cliche and jingoistic because you just wanna salute President Lonestar and hug him at the same time. I love that movie.

But it's too easy to remember Independence Day (and forget the sequel) or a rousing-yet-historically-questionable flick like The Patriot when mulling appropriate entertainment for the Fourth of July. For some reason, any war movie suddenly becomes a nominee for an Independence Day flick, as though fighting a war means you're automatically full of American spirit. But I wanted to find some movies that showcase what it means to be American, without necessarily defaulting to Saving Private Ryan or Pearl Harbor just because they feature American soldiers.

Sure, you could drag out an old saw like Yankee Doodle Dandy. Or you can enjoy some of these choices from the CultureGeeks, as you hide in the air conditioning and wait for the fireworks.

“I came to America in 1914 - by way of Philadelphia. That's where I got off the boat. And then I came to Baltimore. It was the most beautiful place you ever seen in your life. There were lights everywhere! What lights they had! It was a celebration of lights! I thought they were for me, Sam, who was in America. Sam was in America! I didn't know what holiday it was, but there were lights. And I walked under them. The sky exploded, people cheered, there were fireworks! What a welcome it was, what a welcome!” 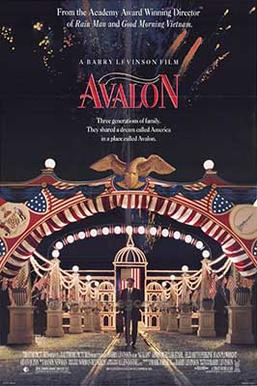 Avalon is an essential Fourth of July movie for me because the way it explores the immigration of one European Jewish immigrant and his family as they settle in early 20th century Baltimore captures the best spirit of this country beautifully. It’s an epic movie that feels intimate, drawn from the story of Barry Levinson’s own family history.

Levinson’s semi-autobiographical series began with Diner (1982), continued with Tin Men (1987), and seemed to reach a conclusion with Avalon but evolved from a trilogy to a quartet with Liberty Heights (1999). Each has its charms, as well as some moments that might or might not fly in today’s environment, but Avalon is the one I revisit again and again as I grow older. After all: “If I knew things would no longer be, I would have tried to remember better” (Sam once more).

Avalon is a time capsule to a time when America’s European immigrant heritage was a more recent, valued memory (except to the people who were dislodged by all those white folks in the first place). Sam Krichinsky, newly arrived in America, sails into Baltimore Harbor on Independence Day in 1914, sees the fireworks, and thinks that it's a welcoming party just for him. The picture, the script, and the score (by Randy Newman!) unite beautifully, time after time after time. And it’s also an almost quaint look at how television’s growing role in the home started the end of real conversation between families … maybe Charlie Brooker could get Netflix to remaster the audio and visual and call this a prequel to Black Mirror.

When I was asked to come up with a movie for this roundup, at first I was stumped.  All I could come up with was Independence Day.  Admit it, you did too.  However, after visions of exploding White Houses stopped dancing in my brain, I started to actually consider what constitutes "a Fourth of July movie that captures the American Experience"?  For me it has to have three main components. First, it has to actually be set on or around the Fourth of July.  Second, the film has to have uniquely American themes.  Finally, I want some American history in my Fourth of July movie.  Also, catchy musical numbers are a plus. And so I humbly give you 1776.

1776 is a civics lesson that entertains.  You want an American experience?  How about a musical set during the actual birth of the nation? 1776 is the story of the Continental Congress from inside the Continental Congress.  Seeing the Founding Fathers squabble unceasingly about matters big and small (and sing while doing it) is pure magic.  Arguing with each other before making enormous decisions that will rock the entire world sounds pretty American to me.  The cast delivers the chaos of creating a new country completely from scratch on the screen, with loads of laughs along the way.  Of special note here is the performance of Howard Da Silva as Ben Franklin, easily the best Franklin ever put on screen.

However, in the middle of all the good times (and singing!), real issues surrounding America's birth are explored.  We get to watch as the Founders struggle with issues of regionalism, love of country (England, for some, a new America for others), the horrors of war, and of course, the slavery practiced at the time in many of the colonies, particularly those of the south.  The compromises that had to be made in order to bring the Declaration into existence make for powerful stuff, although, yes, there is still singing.

So, for good American holiday fun with a dash of history, a bit of education, and (say it with me) SINGING, give 1776 a try this Fourth.  Of course, if this is not your cup of (Boston Harbor) tea, I am sure Will Smith and Jeff Goldblum are ready to blow up alien motherships at a moment's notice.

There are so many films I could choose for a view of the American experience, as hard as that may be to find these days... and my guests already took some of my favorites, particularly Avalon (which carries the dubious honor of being the first movie I ever reviewed for publication back when it was released in 1990).

But if I had to choose, I think this year I would go for Glory. Any film that purports to be "the true story" of anything is subject to immediate slapdown 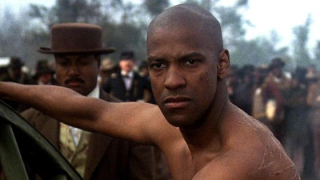 because real life rarely comports itself as we would prefer for maximum film effectiveness. But Glory's real story is remarkably close to the powerful and compelling film by Edward Zwick (with a few notable exceptions). Based on the letters of Robert Gould Shaw, it followed the campaigns of the 54th Massachusetts during the Civil War, one of the first black regiments in the U.S. Army.

Matthew Broderick is perfectly cast as the walking-privilege commander placed in command of black troops who don't know whether to trust him, and Cary Elwes as his conscience - er, second in command. Morgan Freeman is contractually bound to be the voice of elder wisdom in any movie in which he appears, and a very young Andre Braugher shines as a man who never expected to be a soldier and is absolutely terrible at it, but determined to prove himself.

The standout, of course, is a young Denzel Washington as an escaped slave powered by bitter fury, earned by years of abuse and deprivation. The famous whipping scene was used as his Oscar nomination clip, making it very clear to all watching why he became the first black man to win best supporting actor (and eventually, of course, brought home best actor for Training Day). All the skill and power of one of the finest actors in our pantheon is on display here.

The film itself lost the best picture statuette to Driving Miss Daisy, but if I had been allowed a vote, it would go to Glory. It is simply an incredible film, and can wring a tear from the coldest of hearts. It shows us how far we've come and how far we have to go at the same time, while acknowledging the awful parts of our history and the lessons we should have learned by now. It is too easy for the Fourth to become all about American heroism and inevitable victories; to ignore the sad and dark parts of our history is to do an injustice to those who fought and died to bring us as far as we have come.

• Born on the Fourth of July, which really has nothing to do with Independence Day, but points to the dangers of patriotism married to unquestioning obedience in the story of a Vietnam veteran who becomes disillusioned by the war.

• Mr. Smith Goes to Washington, an almost unabashedly idealistic film with Jimmy Stewart as the original Boy Scout (almost literally except the BSA wouldn't let them use the name) who goes to Congress and finds out they've always been... um, just what we call them on Twitter. #notallcongressmen Amazing acting by Stewart, and designed to make you believe good people can do good things if we just get out of their way. It's hilarious that everyone thinks of it as rosy Capraesque fantasy, but when the movie was in production, the Hays Office nearly shut it down for its controversial view of American government. The real-life Senate railed against it and it was banned in several countries.

• The Sandlot, nominated for an epic Fourth of July ballgame.

• Jaws, as Bruce the Shark really gets his chomps in during the Fourth of July celebration at Amity Island. The city leaders line up the public to be a hot lunch so they can keep those tourism dollars on the Fourth! What else could be more American?

• Forrest Gump, one of the few movies that is truly much better than the book. It tells us the history of our country in the 20th century through the unlikely eyes of a man with mental handicaps, brilliantly portrayed by Tom Hanks. Its recreations of historic moments coupled with the emotional drama of living through and surviving the turmoil of the mid-century can't be topped by any other film.

• Captain America: The First Avenger. What, you're not sick of the MCU yet? Cap gets to shine in several movies, but the first one is so chock-full of American spirit that many dismissed it as too idealistic. But that's the real charm of Captain America, as skillfully portrayed by Chris Evans: Everyone thinks he's just too good to be true, but he really is just a kid from Brooklyn. It's his heart that gets him chosen for the magic plot serum, his belief in the equality of everyone and willingness to stand up to bullies, putting others before himself. As CultureGeek Jr. put it when we saw the first movie, Captain America is Superman now that Superman is out to lunch (thanks Zack Snyder). Salute to Cap.

Elizabeth Donald is a freelance journalist, editor, author, photographer, grad student and instructor, as well as the editor of CultureGeek. In her spare time, she has no spare time. Find out more at donaldmedia.com.

Jason Tippitt is a recovering seminarian and mostly recovered former journalist living a few miles beyond that place you stop to use the restroom off Interstate 40 between Nashville and Memphis.

David Tyler is a lifelong aficionado of all things geeky, ranging from Star Trek to chess. He carries his Infinity Stones everywhere he goes.