When I found out a fourth installment of the Toy Story franchise was confirmed by Pixar, I was actually somewhat disappointed. Growing up watching the Toy Story movies, or growing up with any franchise for that matter, automatically makes it a little more special.

I LOVED how they chose to end Toy Story 3, with Woody and Andy physically saying goodbye to each other. It was perfect, it was emotional, it was impactful, and it was the absolute perfect way to end the franchise that revolutionized film animation as we know it.

I felt a fourth movie was unnecessary. It’s not like Disney or Pixar is short on money, and the third one ended perfectly, so why force a fourth one? Then I saw the teaser that literally just showed the main characters dancing around in a circle in slow motion, and at the very end showed this new “spork” guy.

I was weak. Just seeing the characters again, hearing that old Randy Newman song again, I was sold. 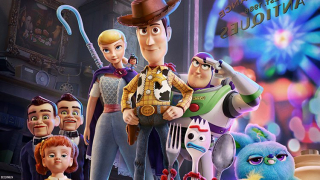 After seeing the movie, I realize why Pixar wanted to make a fourth. There are new characters introduced, and there are old characters and relationships that they wanted to examine and explore.

Of course, the number one way to an audience’s heart is nostalgia, and there’s plenty of it. Pixar is known for putting props from other movies in the backgrounds of other movies. The restaurant Pizza Planet is originally from the first Toy Story, but it has shown up in the background of Cars, The Incredibles, Wall-E, and Up. Nostalgia is the best way to please your audience, and make it feel real and remind you of all the wonderful things you remember about the franchise.

One thing that I love about Toy Story 4 – and all the other Toy Storys – is that at least once in every movie, they tackle a psychological (and sometimes dark) dilemma about being a toy that we never thought about. In the first Toy Story, we see Buzz acclimate and become self-aware, realizing that everything he knows is not real, and that the day-to-day life of a toy like him is sometimes not so spectacular. In Toy Story 2, we see Woody realize that he shouldn’t take everything for granted like having a great kid like Andy by his side. And we see Jessie’s side of the story too, being abandoned by her owner, and wanting to be loved.

In Toy Story 3, we see that Andy finally grows up and has to get rid of all the toys, then getting donated to that hellish dimension they call a daycare. One of my absolute favorite moments from Toy Story 3 is when they’re trapped in the garbage fire pit, and they realize this might be the end, so they look around at each other and they all hold hands together as one – absolutely beautiful. And on top of that we get that beautiful goodbye between Woody and Andy.

It’s a new addition to the franchise, but it doesn’t feel “new.” All the characters and direction make it feel classic.

Ian Smith is a film and theater student in Edwardsville, Illinois. He has grown up with Toy Story and the MCU, and has watched every single one of the Honest Trailers.