For a movie I waited six years to see, Othello wasn't bad.

I've already told the tale of how a Netflix DVD of Othello ended up hanging around my house for six years. This week, I finally watched the bloody thing, which allows us to return it and begin using the DVD mail service again, just in time for a semester in which two of the three members of my household will be studying film.

It was an early outing for Laurence Fishburne, who burns up the screen with Othello's contained fury (and even pulls off his seizure with some measure of realism, a feat not always accomplished by other actors). Despite being a product of the 17th century, race is endemic to the story, and Fishburne pulls off the balance of playing a black man in military service to white leaders in ancient times while never ceding to anyone as master. It's really amazing to watch.

Believe it or not, this 1995 film was the first time an actor of color actually played Othello on the big screen. Today the idea of whitewashing this iconic character of Shakespearean lore would probably burn Twitter to the ground, but onstage Othello had been played by white actors (usually in blackface) until Paul Robeson in 1945, and all prior movie adaptations likewise had such noted ethnic actors as... Laurence Olivier, Sir Anthony Hopkins and Michael Gambon. Oops. (In Orson Welles' 1952 version, he simply rewrote it so that everyone's objection to the marriage with Desdemona had to do with age and physical attractiveness instead of race, so that Welles could play Othello himself. Okay, Orson.)

Notably, Sir Patrick Stewart took on the role in 1997 with the Washington, D.C. Shakespeare Company - but in what they billed as a "photo-negative" variation, where he was the sole white actor with an otherwise all-black cast. I'm not sure how the racial politics would have played out with such an adaptation, but I would have been quite curious to see it. Likewise the 1982 Broadway adaptation with James Earl Jones as Othello and Christopher Plummer as Iago must have been fascinating, and the 2007 with Chiwetel Eijofor as Othello and Ewan McGregor opposite him. 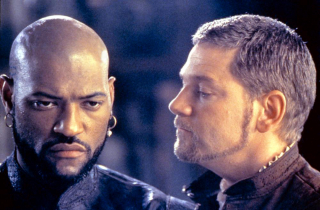 Here the foil for Fishburne's Othello is Kenneth Branaugh as Iago, at the height of his Branaugh-ness. He oozes marvelously across the screen, and his manipulations and asides to the audience are consummately done. You don't quite get the sense of the hatred Iago bears for Othello, an odd misstep for the acknowledged King of Shakespeare, but as always he does a terrific job of translating the sometimes-cumbersome language in a manner that helps even the uninitiated drawn into the story.

The internet record shows that this variation of Othello came about during the O.J. Simpson trial, which may have impacted audience reaction. If so, it didn't help: the movie bombed at the box office and while Branaugh and Fishburne received accolades for their performances, it's largely been forgotten among the major Shakespeare adaptations.

That might be that for all its intense personal drama, Othello is a very talky play. There are a few swordfights and the inevitable stabbity-ness that are required in just about any Shakespeare, but most of the play is conniving people talking to each other and passing handkerchiefs about. First-time director Oliver Parker made a spare play a bit more lush with cinematography and stagecraft that keeps the eye entertained, but there are lulls where we have had seven scenes of people talking at each other.

There's also the trouble of Desdemona. Irene Jacob is there to look pretty and dismayed by turns throughout the film, and not much else. Of course, there's not much you can do with a script that portrays one of Shakespeare's more passive heroines, but Parker really doesn't try. She's merely a cipher for Iago to manipulate around his chessboard and an object for Othello to possess and, if he chooses, destroy. It's difficult to interpret a 500-year-old play through modern eyes, but Othello's murderous jealousy plays so much of toxic possessiveness and domestic abuse that we find ourselves wondering whether they really would have had such a happy marriage, even without Iago's machinations.

It's a compelling film, deserving of a higher grade on Rotten Tomatoes and certainly doesn't deserve its status as a bomb. I'm not sure it was worth six years and $543 paid to Netflix - Laurence of Arabia wouldn't be worth that - but it was an engaging, compelling film and I am sorry that I must, finally, send it back.

Elizabeth Donald is a freelance journalist, editor, author, photographer, grad student and instructor, as well as the editor of CultureGeek. In her spare time, she has no spare time. Find out more at donaldmedia.com.