We asked our panel of Smart People the quintessential question from Scream: What's your favorite scary movie? No one answered with that movie's choice: "Showgirls. Absolutely terrifying."

If Exorcist was about parents facing the changes of the 1960s through their suddenly-incomprehensible children, then The Purge movies are a conglomeration of all our social and political fears compiled into one. The Haunting of Hill House - a surprisingly good and absolutely not faithful adaptation of Shirley Jackson - is about family drama and depression manifested in a haunted house. I don't even need to get into the social politic of Get Out or Us (and Jordan Peele isn't really fond of Us Halloween costumes), because that's been well-discussed everywhere. There's Invasion of the Body Snatchers (which has a different permutation in every generation that remakes it), and the Dawn of the Dead remake, which shines far above the original with the single most horrifying opening sequence of any movie ever (as Jason says, #sorrynotsorry).

But I'm going to go with Oculus, as the movie I find most genuinely frightening and that I desperately want to rewatch this 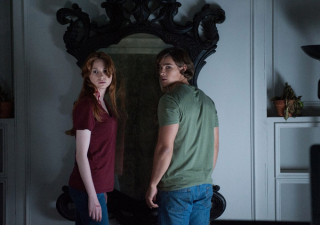 Halloween season. At a certain point even acknowledged classics like Nightmare on Elm Street or Alien lose their fear because I've seen them so many times I know when the killer is going to hop up and go stabbity. While watching Halloween has become a family tradition while we wait for the trick-or-treaters, I can easily go get a snack because I know from the (terrific) John Carpenter music when the next boo is coming.

Oculus rose and fell in 2013, barely noticed by most viewers, and that's a shame. Starring Doctor Who alumna Karen Gillan and Maleficent's Brendan Thwaite (a Brit and an Aussie playing American twentysomethings), it's basically the story of a haunted mirror that ... collects souls? Possesses its owners with homicidal mania? We aren't quite sure, but we know the mirror is bad news.

Mirrors are creepy things, aren't they? They show us the world around us and ourselves, but only a reflection as perceived by the eye. What if what we see in a mirror isn't exactly how it is... or how it's supposed to be?

Oculus takes that unreality a step further, where we can no longer trust anything we see - and neither can our hapless siblings, trying to solve the mystery of what happened to their parents long ago when the mirror first came to their home. Rory Cochrane (of Argo) and Battlestar Galactica alumna Katee Sackhoff play the doomed parents in flashbacks... or are they? They could easily have devolved into standard-issue horror victims, but Cochrane and Sackhoff manage to make their roles into three-dimensional humans caught somewhere between marital strife, mental illness, domestic violence and demonic possession. Does it seem like that list has a step too far? They bring us there, and it's creepy as hell.

A combination of excellent actors and the visuals of a perfectly ordinary house with an extraordinary mirror make for a suburban-terror tale that leaves me doubting everything I see, from the apple in my hand to the mirror on the wall. I can't recommend it strongly enough.

I'm not a huge fan of traditional horror (#sorrynotsorry). I should have realized I had a problem when everyone told me The Exorcist would scare the hell out of me (pun intended) and instead it bored me to tears despite the Max Van Sydowness of it all. 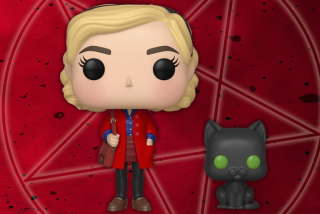 My ideal Halloween-season viewing would be something like HBO's excellent Mindhunter television series, which uses a mixture of real characters and composites to re-enact the creation of the FBI's behavioral crimes unit, the people who hunt serial killers (and who came up with that term). Love or hate Bret Easton Ellis, the movie Less Than Zero was a formative movie for me in the 1980s that did more to scare me away from illegal drugs or even underage drinking than any number of hell houses or smashed-up cars parked outside my high school did. It made me care about a group of friends (Andrew McCarthy, Jami Gertz, and Robert Downey Jr.) and grieve as addiction did its worst. Kicking soundtrack, too.

Any production of Hamlet will do -- whether the ghost is a true spirit from the land of the dead or the prince's subconscious, take your pick, the route the young Dane takes is going to end up just as bloody.

Of course, there are always exceptions. The next time I watch Netflix's The Chilling Adventures of Sabrina, my eyes will not be the only ones riveted on the screen. Reading calorie counts -- well, let's not go crazy here. Have a happy Halloween!

Made famous because of the flying silver ball that could kill you by drilling into your head and sucking your brains out, the movie became a cult classic and spawned a five-movie film franchise that just recently wrapped up. The movie is about a young 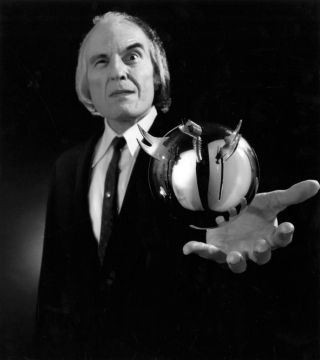 boy named Jody trying to deal with the loss of his parents and his recently killed brother. When he sneaks to the funeral to watch, he sees the caretaker of the funeral home pick the coffin up by himself and put it back into the hearse. And thus the mystery starts with Jody trying to find out what is going on in his small town and trying to deal with the possibility of his older brother Mike leaving him with family to find better things in life.

Why is this movie one of my favorite scary movies? I think it has to do with Angus Scrimm, who played the Tall Man, who [redacted for spoilers]. His screen presence was so strong, and you can see that he threw himself into the role with all of his heart and soul.

I watched this movie when I was a young teen, on channel 24 Creature Feature one Saturday night in my room all alone. Because of Scrimm, I had to turn the light on. When he would call to Jody, in that tenebrous voice saying, “BOOOOOOY!” it would send chills down my spine. You never knew what was real and not real. Anything you saw could have been an illusion, and you were always trying to determine if what Jody was dealing with reality or a trick from the Tall Man.

Phantasm also provides me with one of the funniest moments from my teenage years. My brother Lee had a friend staying over one night and I saw that the movie was showing on the late-night Creature Feature again. I bet him and his friend that they couldn’t watch the movie all the way through with the light off. They both scoffed at me and said they could make it. About 30 minutes into the movie, Lee had to go use the bathroom during the commercial break. When he returned, he turned the lamp on before sitting down. I laughed and he promptly told me to shut the f--- up. So thank you to the Tall Man, for scaring me and giving me a good laugh.

Jacob's Ladder (1990) - A bereaved Vietnam veteran fights his own mind as he struggles with the death of his son.

Twilight Zone, "The Incident at Owl Creek Bridge" - Based on the Ambrose Bierce short story, any further details would be spoilery.

Watcher in the Woods (1980) - An American family moves into a house in England where a girl once disappeared...

They Live (1988) - Science fiction action thriller... follow the bouncing genres, Roddy Piper is a drifter who acquires magic sunglasses that reveal the world is being run by grotesque alien critters who masquerade as us and use subliminal messages to get us to consume products, breed, etc.

The Conjuring and Annabelle series - If you can forget that the Warrens were real people and the movies are boolsheet, these are very creepy possession/haunting flicks.

The Scream series - Envisioned as a send-up of '80s teen slasher flicks, they accidentally reinvigorated the genre by simultaneously satirizing and improving upon them.

The Serpent and the Rainbow (1988) - An anthropologist chases rumors of a "zombie drug" to Haiti, where he falls deep into black magic and live burial. Starring Bill Pullman, it was loosely based on a nonfiction account by a Harvard anthropologist who delved into zombification folk-medicine practices in Haiti (but was criticized by some of his peers).

IT - Elizabeth says: I gotta go with the TV series, plus or minus the world's second-silliest fake spider. The kids are amazing (especially the late Jonathan Brandis) and the adults fare pretty well in their fight against the amazing Tim Curry as Pennywise. Nothing against the new crew, which did the best it could with the inexplicable changes made to the script, but I can't be afraid of the buck-toothed New Pennywise. Curry was terrifying just standing by the side of the road, waving with a balloon in hand.

Copycat (1995) - Sigourney Weaver as an agorophobic profiler and Holly Hunter as a cynical detective team up against a serial killer who copies the various methods of actual serial killers in a suspenseful flick that is as much a tour of the strange psychology of serials as it is making us afraid of them.

Buffy the Vampire Slayer, "Hush" - We only allow a few TV episodes on this list or it would be nothing but The Twilight Zone. But "Hush" seems to make everyone's list, as the Gentlemen float in and rip your heart out without offering the release of a scream.

Blair Witch Project (1999) - It either worked for you or it didn't, and if it did, it was a shotgun blast to the head.

28 Days Later (2002) - A pioneer of the "fast zombie" fun of the early 2000s, Danny Boyle's British take on the zombie subgenre deals with the darkness in human souls as much as the survivalist focus of most zombie flicks.

Carnival of Souls (1962) - A woman survives a terrible accident, but is drawn to an abandoned carnival. Remade in 1998, but no one saw it.

The Wicker Man (1973) - A Scottish detective flies to a remote village on reports that a young girl is missing... but no one admits to ever having heard of her, and they have some odd rites...

Approximately half of the Stephen King oeuvre, including The Shining, which is beloved by Kubrick fans and someday Elizabeth will write her definitive reasoning why the TV miniseries was superior in almost every way, right before she enters witness protection.