Roundtable: Joker is no laughing matter

When you hand him the Oscar, can you introduce him as Joker?

Joker is what you get when you have a mediocre, overbearing director standing on the shoulders of one of the greatest actors of our time.

I've heard the audience and few critics say that this movie does a bad job of making us sympathize with the devil, and I have to completely disagree with them, because I feel this is more of a piece that's showing us how or why that devil came to be.

The portrayal of violence has been a controversial topic of discussion, for months now, even before the movie released! My two cents? It doesn't have as much as violence as John Wick or Anna or Ready or Not or Liam Neeson's Cold Pursuit.

The film is a psychologically rich portrait of a mentally ill loner that just happens to take place in a world that will one day yield a cowl-wearing billionaire vigilante. It lays out this life in decline and dares us to watch how it turns out. It works much better as a singular character study than as a broader sociopolitical drama. And regardless of where you will personally sit in reaction to its material, the fact it's inspiring conversation is an achievement in itself, and is nothing less than admirable in my opinion. I feel that the less you think about Joker as a comic book movie, the more you'll like it. I would always prefer movies that make you want to have discussions over the disposable ones that come out every other month.

The movie definitely is a calculated risk on WB's part, and I really hope it works for them, as that would open doors for more R-rated "superhero" films from the studio. It would make them stand out from all the Marvel films, which will (hopefully) hit saturation soon, now that the grimace has turned into ashes. I imagine how the movie would've played out if there wasn't a commercial imposition that the main character has to become the Joker at the end, or may be. WB could've gone the M. Night Shyamalan Split route and kept the entire Joker thing under wraps, calling the movie Arthur or something.

If only Todd Phillips' movie had the depth or clarity of vision to match up to its star's performance. But even with all its negatives, Joker stands out as a formidable and twisted film, both primarily because of Joaquin Phoenix. He isn't so much an actor as a moral contortionist in this origin story that features too many overt nods to the Scorsese movies from the 70's and 80's. Phoenix has plumbed depths so deep and given us such a complex, brutal and physically transformative performance that it would be no surprise to see him take home a statuette or two come award season. Heath Ledger definitely would have been proud, if he was able to witness this.

And with that, we have the clown who fights Batman as the most coveted role in Hollywood. 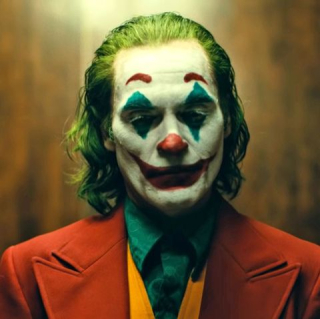 In the latest movie from Warner Brothers under the DC banner, director Todd Phillips tries to show one of the possible ways that a man might snap and become a villain.

In Joker we are introduced to Arthur Fleck, a party clown living with mental illness and a condition of uncontrollable laughter when he is stressed. He tries to care for his mother, hold down his job, and stay balanced in a city that is suffering from crime, corruption, and a nasty garbage workers strike. As one bad thing after another happens to him, he begins to slip into madness, and we see the results of his fall.

Is Arthur Fleck a victim of his environment? Is he a madman that should be feared and we hope gets killed in some way? I really don’t know, to be honest. The movie has shown me one thing: Joaquin Phoenix’s performance is powerful, frightening, and one of the best if not the best performances this year. He at least deserves to get an Oscar nomination, if not win the bloody thing.

This movie isn’t your usual comic book movie. There are no crazy CGI special effects, no super powers, nothing magical. Just a gritty, dirty city and one man’s journey to become a villain. There are a couple of Batman Easter eggs here and there if you look for them, but this isn’t Batman’s story. This is Arthur's story, so don’t expect to see a superhero to show up to save the day.

If you removed the word Joker from this movie, and renamed the Waynes as the Jones family, this movie would probably be shed of many of the complaints about it. But it is not a movie that should be ignored.

It's not a superhero movie, nor the kind of film that one usually associates with comic books. That's partly because most people think of comic books as inherently fantasy, magic skills and funky devices and spandex costumes with awesome back spin kicks and flying - even from fans. That, of course, is only one level of comics, a medium that has illuminated depths and darkness far beyond the grittiest crime drama. I said when The Dark Knight premiered that if it were not a Batman movie and was billed as a mob drama, it would have taken home best picture. I had that same sense watching Joker, that this movie could have been billed as any crime drama outside of Gotham City, and it would be viewed very differently.

Joker is not best picture. It has many flaws, pacing among the worst of them - for a good portion of the film, I found myself hoping it would hurry up and get to the point. It has created an indescribably vicious urban hell that is basically the worst nightmare of the early 1980s brought to celluloid. As we walk the streets of Gotham with Arthur Fleck, we are uncomfortable watching the awful things that happen to him, because we know there can't be a happy ending for the bad guy - and he's the bad guy, right?

We should be uncomfortable. Joker is the most political movie I have seen in years, a movie centered not on spandex and fisticuffs, but on a deeply divided, inequitable society. The things happening to Arthur are the same things that happen in our actual society, on the abuse of the different, the harshness of the streets, the selfishness of many humans, the cruelty of those in power. It is disheartening to watch, because we know these problems and that they have no easy solutions.

But what exactly is the politic of Joker? From one perspective, one could view it as a mockery of the resistance movement, that the poor and angry 99 percent are sheep being manipulated by a madman into violence over nothing. "Those who oppose this unjust establishment aren't given a specific ideology, just explosively violent rage," writes Matthew Rozsa of Salon. "It offers no solutions beyond 'burn it all down.'"

From another perspective, it could be viewed as a warning to the 1 percent: the consolidation of power and money among the very few is enraging those who fight and die in the streets, and there will come a boiling point. Thomas Wayne is the walking personification of privilege here, spouting nonsense about how wealth just means you worked harder than the rabble, and speaks of the protests against him with such disgust and dismissiveness that in another decade, I would wonder how he could strive to be elected to anything. There is a sense that the wealthy of Gotham City live in a carefully protected bubble, and Arthur pierces that bubble in the most violent way possible.

Rozsa hit on another of the major concerns: that Joker could be seen as a dangerous manifesto that could compel those who struggle with violent tendencies to commit acts of violence. And I must admit, it struck my mind that as much as Joker was uncomfortably real and awful to me, to someone of a similar mindset as Arthur, it could be quite the inspiration.

Is it responsible to create works of art that feed the darkest of impulses? Conversely, is it responsible to whitewash such art to the point where we can simply pretend worlds like Arthur's do not exist? These are questions for far wiser minds than mine.

One of the major concerns many fans had going into this film was that the Joker has always been an enigma. Any attempt to codify an origin story for the Joker is met with disdain and/or backpedaled quickly out of existence. The Heath Ledger variation played on that very mystery, with Ledger's Joker giving a different tale to everyone he meets about the source of his scars.

Fortunately, this was one area that I felt Joker handled well. There are multiple possible backgrounds for Arthur, and we are never sure which is the real one. It makes a mastery of the unreliable narrator structure, with repeated instances where we are unsure if the events unfolding are real, or merely Arthur's imagination. Even the ending puts the film itself in an entirely new perspective and leads us to question everything we've seen. For some audiences, this will be enormously frustrating; for others, it makes the film complete. Therefore it's difficult to know whether to recommend this movie, as it will definitely be one of those "love it or hate it" films.

One thing no one can dispute: Joaquin Phoenix has turned in a career-level performance. His physical contortions are matched and surpassed only by the emotional gamut he runs as this deeply damaged human attempting, in his words, to find joy. Phoenix is acclaimed for his method acting, and one can only imagine the depths to which he had to reach to find this particular character. Joker is more of a character study than a story, with the wider background of the crime-ridden, disastrous dumpster fire that is Gotham City as mere background to illuminating Arthur.

Is the Joker a born psychopath who found his way to becoming the Clown Prince of Crime, or is he a troubled, damaged man pushed into horrible acts by the torment of the city? Joker has no answers for us, not even in the form of a bat.