Pardon my language, but fuck cancer.

I’ve lost several family and friends to the disease, and now I’ve lost one of my heroes. Neil Peart, the drummer of the band Rush and considered one of the best drummers to have ever lived, has passed away due to brain cancer.

Peart joined Rush to replace the original drummer, and bandmates Geddy Lee and Alex Lifeson called him ‘the new guy’ even decades later. Peart's skills on the drums was legendary, and he also served as the band’s main lyricist. These skills served the band well and several big hit songs and albums followed.

The main song that you think of when you say the word Rush is "Tom Sawyer," a song that I hold dear to my heart. 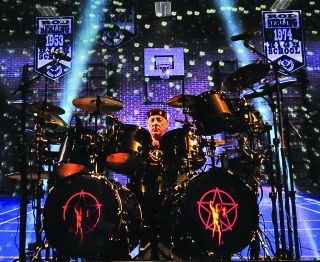 From the obituary in Rolling Stone: "Peart was one of rock’s greatest drummers, with a flamboyant yet utterly precise style that paid homage to his hero, the Who’s Keith Moon, while expanding the technical and imaginative possibilities of his instrument. He joined singer-bassist Geddy Lee and guitarist Alex Lifeson in Rush in 1974, and his musicianship and literate, wildly creative lyrics  – which drew on Ayn Rand and science fiction, among other influences – helped make the trio one of the classic-rock era’s essential bands. His drum fills on songs like 'Tom Sawyer' were pop hooks in their own right, each one an indelible mini-composition; his lengthy drum solos, carefully constructed and full of drama, were highlights of every Rush concert."

To watch Peart perform on the drums was to see a man possessed with the music, the rhythm, and the sheer joy of being one with what you were born to do. I was honored to see Rush play live in concert in 2015. It was a night that I will always remember, and seeing him perform his drum solo was a sight to behold.

Today, for me, the music died. I saw the news and I was literally crying as though I knew this man personally and that we had shared beers at a bar for years. Other singers and musicians that I loved have passed in recent years, but none of those deaths hit me like this.

I think it’s because the finality that this means to the band and the music. You can’t just go out and get another drummer to replace Peart. I believe the reason for this is because he still practiced, took drumming lessons all the time from other drummers, and refused to be anything but the best he could be. When he retired after their last tour in 2015, he noted that he was in constant physical pain during the tour and that he had bad tendons and carpal tunnel in both arms. So as much as it hurt to see him go, I understood as a fan that it was necessary.

He was diagnosed with glioblastoma three years ago and kept it hidden from the fans. It is a sad day for music, for Rush fans, and for me. His lyrics and drumming reached my soul and heart, and I will always love the enjoyment the band Rush gave me over the years. You were a master drummer, Mr. Peart. I will miss your skills and they will never be replaced.

Jim D. Gillentine is an author and self-professed comics geek, having immersed himself in four-color prose since the 1970s, and is the biggest Godzilla fan in the western hemisphere. He is currently completing his bachelor's degree at Southern Illinois University Edwardsville. Website.