The Criterion Company that produces high-quality film collections decided to go old school for their Spine 1000. They decided, with Toho Studios, to make the ultimate Godzilla movie collection, starting with Gojira in 1954 and ending with Terror of Mecha-Godzilla from 1975.

This 15-movie set that is contained on eight Blu-Ray disc is a dream collection for a Godzilla fan. I was lucky enough to have the coolest in-laws who got this set for me as a Christmas present, much to my poor wife's suffering. In this review, I’m going to look at all the pros and cons to this set, so you can decide is this something that you might want to get for yourself.

The set contains all 15 Godzilla movies spanning the first 21 years of the franchise. It has the American version of Godzilla: King of the Monsters starring Raymond Burr, and as a bonus feature on the eighth disc, the very rare Japanese cut of King Kong vs Godzilla.

All of the movies are the original Japanese versions and the film quality on the disc are some of the best I have ever seen. They have a crystal-clear picture and great sound quality for each movie, as these transfers are direct from Toho Studios. I have other versions of these movies on DVD, and I can say that these cuts are the best I have seen as a collector of Godzilla movies. Criterion has outdone themselves with these productions and you won’t be disappointed with them.

The set itself is a beautiful art book with the eight discs stored in the back cover. Within the book is an essay by film historian Steve Ryfle, and each movie has notes of them from film historian Ed Godziszewski describing the making of each of the movies. Each movie has brand-new artwork from several artists that fits with the theme of the movie.

Some of the real treasures are on the eighth disc of the set, containing interviews with Ishiro Honda, Toho actor Bin Furuya who went on to play Ultraman as the suit actor, plus more special features highlighting the making of the movies.

As cool as the book design is and the artwork on the cover, the thing is BIG! The book is 14.5 inches long and 10.5 inches wide. It can’t just sit on the shelves with the rest of your Blu-rays and DVDs. 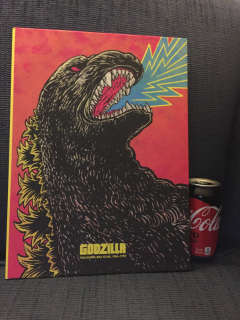 (Coke can provided for scale.)

Only two of the movies in the set have audio commentary, and those are the original Gojira and Godzilla: King of the Monsters. The other movies are all lacking commentary tracks, which is something I enjoy listening to after watching the film for the first time.

Another con that might be a turn off for those that don’t like to read subtitles is that only seven of the movies in the set have English dubbing tracks for the movies. Godzilla:King of the Monsters, Invasion of Astro-Monster, Son of Godzilla, Destroy All Monsters, Godzilla vs Megalon, Godzilla vs Mechagodzilla, and Terror of Mechagodzilla are the only movies that have either an English soundtrack or dub for them. If you don’t like reading subtitles, then you will be out of luck.

There is one final con, and it is a big one: the price for the set. When it was first announced, the price was more than $260! Luckily,when it was released on Amazon, they put it on sale for $112. That's a lot cheaper, but still very pricey if you are on a budget.

I have also learned from YouTuber Daisuke Beppu of Japan that there are some misspellings throughout the book for actors' names that starred in the movies. Daisuke did an extensive seven-video review for the set and he goes in further details about the history and making of these movies.

Do I recommend that you should get this set, even if you already own all these movies on DVD or Blu-Ray separately? Most definitely! These versions have some of the best picture quality of these movies. In addition, the Japanese version of King Kong vs. Godzilla has been next to impossible to find in America due to the licensing issues with Universal Pictures, so it is indeed a treat to be able to own a good copy of the movie.

If you are a Godzilla fan, you owe it to yourself to get this set to be able to enjoy these movies as they were meant to be seen, with the original Japanese versions of the films. Long live the King Godzilla!

Jim D. Gillentine is an author and self-professed comics geek, having immersed himself in four-color prose since the 1970s, and is the biggest Godzilla fan in the western hemisphere. He is currently completing his bachelor's degree at Southern Illinois University Edwardsville. Website.